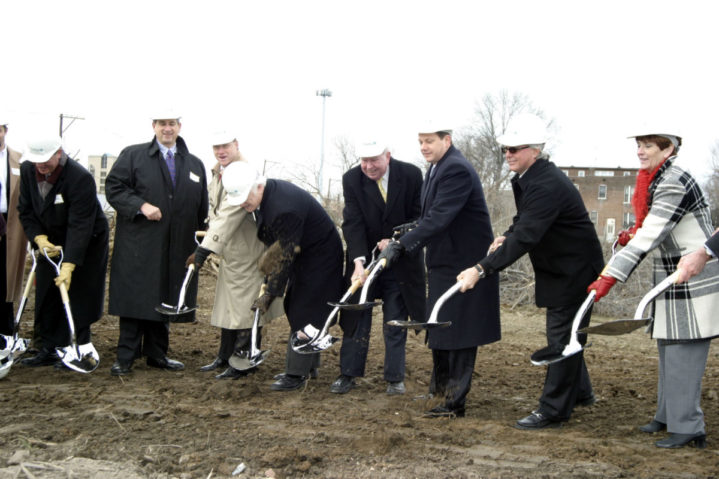 Chapter two in a series on Cortex's development from a fledgling nonprofit to nationally known innovation district. Read from the beginning of the series here.

“While Missouri has the opportunity to become a leading center of the life sciences in the Midwest, this will happen only if the State of Missouri, its regions, universities, research institutions and life science companies commit to investing in and leveraging the state’s life science base over the long term.”
– “Life Sciences & Missouri’s Economic Future: An Opportunity to Build ‘One Missouri’”, Batelle, 2003

The reason to establish Cortex was clear: St. Louis and the region could not be left behind economically heading into the 21st century.

The how was evident: the strength of St. Louis’ institutions at the time fell heavily in the life science realm. And so the vision was determined: to create a district where corporations could establish a presence with access to university talent, labs and intellectual property.

But where would the five founding organizations do it?

It would be cheaper and faster to build out in the suburbs where ample green space would allow for development free from dealing with existing infrastructure. But, despite the extra challenges, the Cortex board decided on a tract of industrial land in Midtown for several reasons.

First, the five founding institutions (Washington University, Saint Louis University, the University of Missouri-St. Louis, BJC HealthCare and the Missouri Botanical Garden) are either located in St. Louis City in close proximity to the Midtown location or are deeply committed to job creation and the City’s success. Additionally, technology-driven companies tend to locate close to universities, with access to research and talent being a key driver in that choice.

Finally, the Millennial Generation, a workforce demographic that Cortex and its tenant companies were increasingly looking to attract, was already carving out a reputation for its desire to live and work in urban areas. 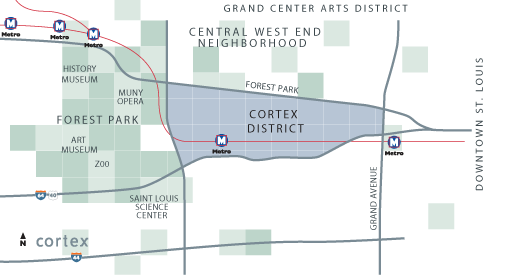 Despite the benefits of an urban location, acquiring large tracts of conjoined land in a city location is difficult, and the Midtown land needed for development was all privately owned at the time. To enable the fledgling nonprofit to purchase the land it needed, the five founding institutions contributed $29 million in capital as collateral for loans and land ($15 from WashU, $5 million each from BJC and SLU and $4 million from UMSL).

Despite this strong base, support from outside organizations and civic entities would be necessary for success. Fortunately, leaders of the City of St. Louis recognized the significance of the project and acted accordingly.

Under the Missouri statute Chapter 353, the City designated the Cortex West Redevelopment Corporation as ‘Master Developer’ of the almost 200-acre district. This pivotal move by Mayor Francis Slay’s office afforded Cortex the ability to oversee the redevelop in the public interest, with tools including the ability to issue tax abatements and to employ eminent domain when necessary.

With the support of the city and the original $29 million contributed by the founders, Cortex built strong relationships with academic, business and civic partners and convinced landowners to sell.

“Sometimes the most difficult projects are the first projects when you don’t have a track record,” says Henry Webber, board member and current chairman of Cortex and executive vice chancellor for administration at Washington University. “So what we now call the Cortex I building was the first big triumph.”

Situated on Forest Park Avenue and completed in December of 2005, Cortex I was designed as a 165,000-square-foot, multi-tenant laboratory project. It features office space, state-of-the-art research and development laboratories and small manufacturing units for tenants.

Three of those tenants were already in mind during the design process: BioGenerator (a subsidiary of the nonprofit organization BioSTL formed in 2003 to create, grow and invest in life science startups in the St. Louis region), Pfizer and Stereotaxis, a researcher and developer of magnetic technology that designs, manufactures and markets advanced cardiology systems for the use in cardiac catheterization labs. Stereotaxis is still headquartered in the building today.

Shortly after the Cortex I building opened, Solae was recruited to join the growing campus. A global leader in the food, beverage and dietary supplement industry, Solae’s decision to join the Cortex campus was an early indicator of the corporate interest that would later develop. Solae’s building, the second built within the district, was completed in 2008.

That same year, the recession of 2008 devastated national and global markets. St. Louis saw the acquisition of Anheuser-Busch by InBev and the departure of Macy’s Midwest that year.

St. Louis, like other major metros, was now home to many skilled but unemployed workers. Creating ways to advance the economic development of the region was more vital than ever.

Amidst this economic upheaval, Cortex served as a small glimmer of hope: by 2009, just four years after Cortex I’s opening, 35 companies occupied the district. In 2010, with the completion of the West End Loft apartments, the district’s first $155 million phase was complete.

Most remarkably, all development in the district up until that point had been led by an extremely dedicated, but entirely volunteer-run board. The first full-time hire was current President and CEO Dennis Lower, who joined Cortex in 2010 as it embarked on the next phase of development: Cortex 2.0. His leadership would prove invaluable, as this phase would bring a necessary ideological pivot.

“When we started, we were primarily in the job creation business, with a focus on technology and a special attention to biotechnology,” says Webber. “What we came to realize was that to be successful as a technology-driven job generator, we needed to offer a wide array of services to our tenants.”

The Cortex story continues with Chapter 3.