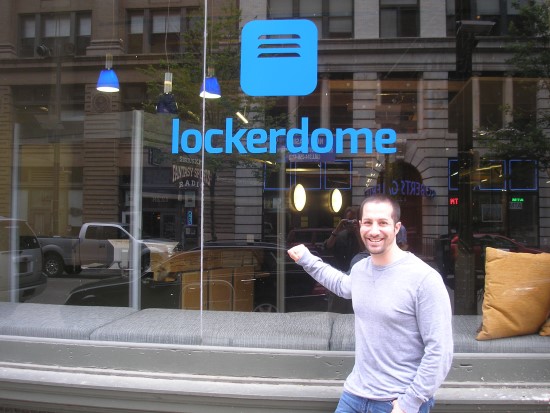 EQ sat down with Gabe Lozano to talk about the founding of LockerDome, GlobalHack, and the St. Louis startup ecosystem.

Gabe Lozano is the founder of LockerDome, a social media platform that brings people together based on their interests as opposed to who they know. He is also the founder of GlobalHack, a nonprofit organization that hosts “hackathons,” where coders work in teams to solve one company’s programming issue with a prize of $50,000 going to the winning team.

EQ sat down with Lozano to talk about the founding of LockerDome, GlobalHack, and the St. Louis startup ecosystem.

When was LockerDome founded?

LockerDome launched in July of 2008, but our first major traction point was in January 2012 when we rolled out LockerDome 2.0, closed a $750,000 financing round, and added Jim McKelvey and Brian Matthews to our board.

That’s when we really hit the public consciousness and attracted both local and national attention. Ever since it’s been consistent and strong growth.

What are the necessary components of a startup ecosystem and how does GlobalHack fit in?

To have great talent, your ecosystem must train, attract, and retain the best people. St. Louis has two notable initiatives that are making huge strides in this area: LaunchCode and Arch Grants.

LaunchCode tackles the technical talent gap by training new talent, ultimately increasing the available pool. Arch Grants, a non-profit that gives away $50,000 grants for startups to move or stay in St. Louis, has proven to be incredibly effective in attracting and retaining top-shelf talent.

Density is equally as important. This is best represented by physical buildings like T-REX and Lab1500, where collectively hundreds of entrepreneurs across more than 100 startups operate daily.

Density is required because when startups fail, as most will, that talent needs to be recycled back into the startup ecosystem. And when companies succeed, the cash and seasoned talent need to go right back into that same ecosystem.

The third focus, bringing products to market, is what GlobalHack is most interested in. I get pitched every single week by an aspiring entrepreneur who has a “billion-dollar idea.”

The reality is that most people who believe they have a billion-dollar idea will never take their idea and turn it into a product that a customer actually uses. GlobalHack is trying to bridge that gap.

We want to use hackathons to quickly move individuals from idea to product. GlobalHack I was instrumental in serving as a launchpad for TopOPPS, a startup run by superstar Jim Eberlin, that everyone should keep an eye on.

GlobalHack works differently than other hackathons, doesn’t it?

Most hackathons are free-form hackathons, where participants build a wide range of products. At the end, they present to a random panel of judges.

There are many problems with this system. For one, it’s nearly impossible to effectively build a judging panel with strong domain knowledge, or knowledge of the industry, given the wide range of solutions.

Second, the judges have no skin the game, so they are most likely guessing whether or not the market will care about what has been built. Third, many participants are walking in with work done in advance, so teams are not on an equal playing field.

To address these problems, GlobalHack works with one company and proposes one problem, which is announced at the start of the event. Then, every team or participant works on that same problem for a chance to win $50,000 in cash.

The title sponsor awards this prize in exchange for the winning team’s intellectual property (IP). Building the hackathon around a single company that forms its own judging panel guarantees that the judges have relevant domain knowledge.

Having the company offer $50,000 to the winning team means they have skin in the game and are choosing the best possible solution; in a sense, the company represents a customer in the marketplace. Requiring all teams to work on the same problem — and not announcing that problem until the start of the event — means that no team has a significant head start or unfair advantage.

Didn’t TopOpps, the sponsor of the first GlobalHack, give out two cash prizes instead of the planned one prize?

Yes. They had 200 uber-talented developers, designers, and entrepreneurs critically think about their company for a full weekend, which means that there were many great ideas that resulted from the event.

Jim Eberlin, Founder and CEO of TopOPPS, was so impressed with the second-place team that he decided it was worth putting up another $10,000 to acquire the IP from their weekend-long efforts.

Is there a further benefit in exposing these programmers who compete in GlobalHack to what’s going on in St. Louis?

Absolutely. Beyond getting products to market, GlobalHack helps expose and attract outside talent to the St. Louis ecosystem. Following the first event, two participants moved from California to St. Louis.

GlobalHack also drives value through density by putting hundreds of talented individuals from all over the country together in a room. That leads to relationships that continue well beyond the event itself.

What do you see as the greatest strength of the St. Louis startup ecosystem?

Every ecosystem that has taken off has similar attributes. They attract, train, and retain talent. They build high levels of density; places like T-REX exist in a bunch of other cities.

And, they put on hackathons and other builder events to push products to market. These attributes do not make St. Louis special. They are the baseline requirements. Our greatest strength is inspired mobs.

St. Louis was one of the greatest cities in the world at one point, and we’re on a mission to reclaim that. For the first time in many years, people believe that greatness is possible again. When you believe something is possible and are inspired to do it, weird (and great) stuff happens.

A byproduct of inspiration is that people get off their asses and get involved, which means that we’re starting to see a collaboration of resources from generally unrelated sources. A great example is Arch Grants, where corporate superstars like Arnold Donald, the CEO of Carnival Corporation (Carnival Cruise Lines), sits side-by-side with me, a young entrepreneur.

He does not need to sit there and judge a startup competition. This does not remotely affect Mr. Donald or his company, a 25 billion dollar company, but he wants to see the city win.

Also Maxine Clark, who is the incredibly successful founder of Build-A-Bear. If anyone emails her, she replies. She’s extremely accessible, and she doesn’t have to be. She just wants to give back and doesn’t ask what’s in it for her.

That’s one of the things I’ve heard frequently in the three years I’ve been covering the startup ecosystem, is how accessible executives are to young entrepreneurs.

Accessible and selfless. In most other cities where we do business, including the Silicon Valley and New York, people tend to ask — or at least wonder — what’s in it for them. Here, everyone just wants to see St. Louis win.

Fact. We’re getting back to our roots. We have so many great companies that were built here from the ground up.

Where do think St. Louis will be in 10 years?

Within 10 years, St. Louis will be one of the top 10 technology ecosystems in the world. The momentum is building.

There were 33 St. Louis-based startups in 2013 that raised a million dollars or greater.

What do you think it will take for us to reach that point?

Additionally, these kinds of exits pull new capital off the sidelines. When a billion-dollar exit occurs, the level of excitement and cash that is unleashed will surprise almost everyone.

St. Louis is one of wealthiest cities in the entire country — not in terms of annual income, just in sheer wealth. I don’t know the exact stat, but it’s been estimated that there are anywhere from 40,000 to 100,000 accredited investors in St. Louis.