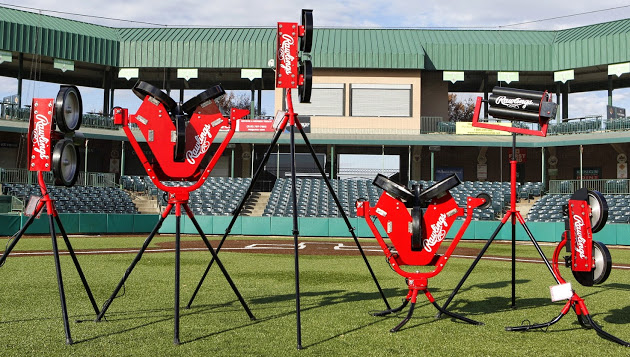 From Opening Day to Demo Day, Spinball Sports is Ready to Pitch

But Hart also knows how to pitch off the field. The Capital Innovators graduate catches us up on where the company is now, what’s going on with its partnership with Rawlings, and what the rest of 2016 looks like.

Spinball Sports: What was the impetus for founding this company?

I’d been looking for opportunities to start a business since I graduated from UM-Rolla in 1992. This just happened to be the first one that worked out. It turned out to be a perfect match for my skillset and background.

How did you get the idea to create (engineer, prototype, produce, etc.) a pitching machine?

I played baseball in college and still play in a couple of senior leagues. All the machines I’d used before had the same limitations. They were too heavy, too hard to set up and too expensive.

I knew I could do better and set out to design a fully automated machine. It turned out to be much more difficult than I expected, so I had to take a step back and build a basic machine first.

I formed the company around that first basic machine, and after a couple of years of running Spinball as a side business, I was able to quit my job at Boeing (I was a mechanical engineer designing F-15 flight simulators) and pursue Spinball full time. [Now] I’m putting in 60+ hours a week splitting my time between CEO and CTO duties.

At what point did you go through Capital Innovators?

We were part of the 2015 fall cohort. At that point, we were still recovering from a tough couple of years, but definitely headed in the right direction.

We were profitable in 2011 and 2012, but we really bungled our contract with Rawlings in 2013, and we lost money for a couple of years. Because of that, we were short on funds and open to new investors and new advice.

What have you gained from your experience with the accelerator and the program?

We applied to CI for two reasons: investment and advice. They had a terrific track record of attracting investors and a lack of funds was seriously hindering our growth.

We haven’t found any new investors yet, but our demo day isn’t until May 17, so it’s really too early to tell. I think the greatest insight we gained from the program was that corporate culture trumps all.

You’ve got to maintain a positive synergistic work environment to succeed. We were also forced to fully define our market, which turned out to be somewhat different than we had assumed.

Can you talk a little bit about your work with Rawlings?

Our contract with Rawlings is a licensing agreement, which means that we can put their name on our products and sell them as Rawlings brand pitching machines. They get a percentage of sales, and in return, they provide marketing support and distribution.

They were instrumental in bringing us into the pro-market. Rawlings could potentially buy us out sometime in the future, but at this point, there’s no commitment either way.

I had designed the Pro-Line machines as an upgrade to the Spinball Wizard just before we met Rawlings. When it became clear that we would be in business together, we decided to put the Rawlings name on them, and held off releasing them until the contract was finalized.

Now we sell both: the Spinball as a basic value machine, and the Rawlings as a top end machine.

Do you plan to keep the company in the Metro East area?

That’s the plan. When we bought our current lot in Mt. Vernon, we left plenty of room to expand, which will hopefully happen this summer.

We’re using local vendors and the employees are becoming a real team. Moving would disrupt all that.

What’s next for you and Spinball Sports?

Growth! As CEO, I thrilled that we just broke into the big leagues this spring with sales to the Cardinals, Indians, A’s and Rangers.

As an engineer, I’m more excited about our new products. We’re about to release the iPitch, a fully automated machine controlled by smartphone or tablet, in testing now for release this summer.

But the real game-changer is an entire line of realistic arm style machines.

The top of the line Armageddon will be the world’s first arm-style pitching machine that can throw a curveball. It’s also controlled by smartphone and will be the absolute ultimate in realistic batting practice.

I’ve always admired Nolan Ryan as the prototypical power pitcher. Nothing sneaky, just here it is – try to hit it.

And which team are you rooting for in the MLB?