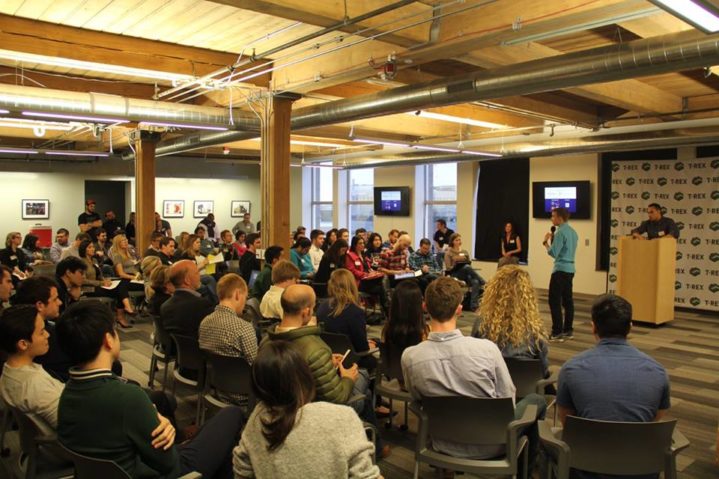 Last night more than 40 companies and 50 job-seekers came together at T-REX for the first Startup Talent Showcase presented by Pluggedin St. Louis and Full Circle STL.

Each company got a chance to speak and explain who they were and what they were looking for in new hires. In return, job-seekers were allotted time to pitch themselves to the companies. Founder and CEO of Pluggedin St. Louis Colleen Liebig said the event attracted a nice mix of both technical and non technical talent.

“I was really happy with the turnout,” she says. “It was just the right amount where it was enough to really get a sense of the talent landscape at the university level in the region, but also not too many people where it was a drawn out event.”

“For us, our pitch includes the line, “it’s not for everybody”. We’re looking for people who are motivated, who want a challenge and who want ownership,” says Brett McCann, CEO of Appistry.

“Every one of our employees has ownership of something. They’re not cogs in the wheel, we’re all cogs.”

Liebig said she was told by companies based outside of St. Louis that it was refreshing to see hungry job-seekers.

“We had one job-seeker literally say, “I love to work and I’m ready to work my ass off,” which is like the best thing you can say,” laughs Liebig. “That, to me, was just so cool.”

Job-seekers came from 15 universities throughout the region as well as recent-grads looking to get into the STL startup ecosystem. “The opportunities are exciting, says Alaina Donovan, a soon-to-be SLU grad interested in marketing opportunities within the startup space.

“My old sister worked for a startup that turned out to be super successful called Casper and I was inspired by her. She said it was a great learning experience and the work culture is unlike any other, so that was my main draw.”

Donovan admitted that it was intimidating to get up and talk about yourself in front of people who’s job it is to judge you, so prior to the showcase, job-seekers were able to practice their one-minute pitches and gain feedback from Cultivation Capital’s Allison Carmen and Scott Jenkins, a Capital Innovators mentor. During the showcase the general tone was one of encouragement.

“One thing I wasn’t expecting that was a nice touch, was this sense of camaraderie,” says Liebig. “There was a lot of support and applause from the crowd.”

An after-party immediately following the showcase offered an opportunity for startup founders, influencers, students and young professionals to connect past the quick pitches while enjoying food and drink from local sponsors like Urban Chestnut, Urban Eats, Earthbound Brewery and Pi Pizzeria.

“Normal career fairs are a little stiff, and you don’t really get to know each other outside of a blank conversation about your resume, says Diana Zeng, executive of Full Circle.

“And if you’re bringing in someone to your company, especially startups when the companies can be small, it’s really important to know if you get along with each other, that intern can be 1/5 of your team.”

“We wanted to give everyone a chance to dive into deeper conversations with each other, We also really wanted to continue the theme of the night of highlighting local businesses, highlighting local food and drinks and let the job-seekers and the companies know that this was really about getting to know each other in a more genuine way.”

From here, companies will receive the resumes of any job-seekers that pitched at the Showcase, and those job-seekers will receive a list of companies that presented with contact information in case they want to follow up. Liebig said that even before the end of the night companies had told her they’d set up interviews with potential talent they’d just met.

“Now that we’ve had all of these different job seekers representing all of these different universities actually see what T-REX is, see what Plugged St. Louis can do in terms of helping them find a job, and seeing what kind of companies are in St. Louis; I hope that the word will spread and we will have more and more students interested in working with startups and looking to us to help connect,” she says.

She hinted at an upcoming event in early summer partnering with Venture for America, and another showcase towards the end of the summer specifically for fall internships, saying that the response from this first one was incredibly encouraging.

“Anytime somebody is trying to do something that may benefit the St. Louis community, it’s amazing how quickly come people together to support it as a city,” says Liebig.

“People came together like lightning. There were a lot of people from the community, business owners, my interns Sarah Rizzo and Alex Gutierrez, Kathleen Bauer and the rest of the T-REX staff that helped make this possible. I’m just so grateful that everybody was there to do that. We can’t wait to put on the next one.”