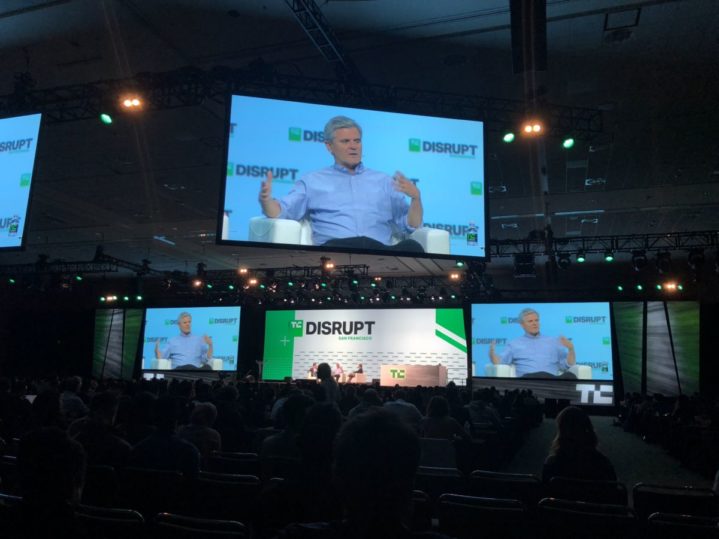 Steve Case at TechCrunch Disrupt: Partnerships Are Critical To The Third Wave Of Tech Company Growth

The Third Wave is Steve Case’s thesis (his book) that a new economy will emerge across the United States in cities that typically do not attract much venture capital. The pattern of venture funding distribution is likely to shift change as it is predicted that the next generation of tech innovation will need to take place in closer proximity to customers and their target industries.

Check out the full interview video here. Skip to the 17 minute mark for this specific discussion.

He argues that the tech industry was never intended to be so regionally specific to Silicon Valley. It’s just a slow evolution over time. In fact, the first wave of internet companies (of the late 80 and 90s) were all across the nation.

“That first wave of the internet actually was regionally distributed. We (AOL) were based in the DC area. Compuserve was in Columbus, Ohio. Dell was in Austin. Microsoft actually started in Albuquerque, before moving to Seattle; Sprint was in Kansas City, the major communications company at the time; Hayes with a modem company was and Atlanta gateway was in North Dakota, I could keep going down the list.”

However, it the second wave of internet innovation, specifically around software expertise, that cemented the position of Silicon Valley as the premier tech hub.

“That first wave was quite regionally distributed it. The second wave when it really was about apps and software writing on top: that’s when Silicon Valley really became so dominant. We really do believe that The Third Wave will see innovation both regionalize within the United States and globalize around the world.”

There is a ‘truism’ among investors in Silicon Valley, that outsiders might be better at disrupting major industries: Paypal often held as an example of such a company. Indeed, the ‘outsider’ investment thesis matches a portfolio company of St. Louis FinTech accelerator, SixThirty who backed BondIT founders disrupting the payment industry, despite it not being their specific area of expertise.

However Case asserts domain expertise will drive the next generation of companies and asserts that it will be a critical factor in the new economy.

“Where [the internet] is disrupting some of these kind of real world sectors like health and agriculture and so forth, domain expertise is going to become important and partnerships are going to become important… We believe that if you’re trying to really revolutionize healthcare, you actually do need to know something about how doctors work and how, you know, nurses work and how hospitals operate and how the the payment systems work, and even some of the regulatory issues — that domain expertise will be important. And we also believe – in this third wave – partnerships are critical.”

The Rise of The Rest founder is bullish about innovation expanding regionally and globally because of changing dynamics over the next decade.

On starting new companies, he remarked, “is not about dropping your app in the App Store. And suddenly being, you know, Snapchat or Facebook or something… [that was] the second wave model (where it was really software running on top of the internet). When it’s really being integrated [tech], in much more fundamental ways that expertise is going to be critical; and also partnerships are going to be critical.”

Check out the full interview video here. Skip to the 17 minute mark for this specific discussion.

With the Ameren Accelerator, Sling Health, Sixthirty and ITEN pivoting strongly towards corporate partnerships in 2018, St. Louis sounds like it is doing a lot right in Steve Case’s eyes.