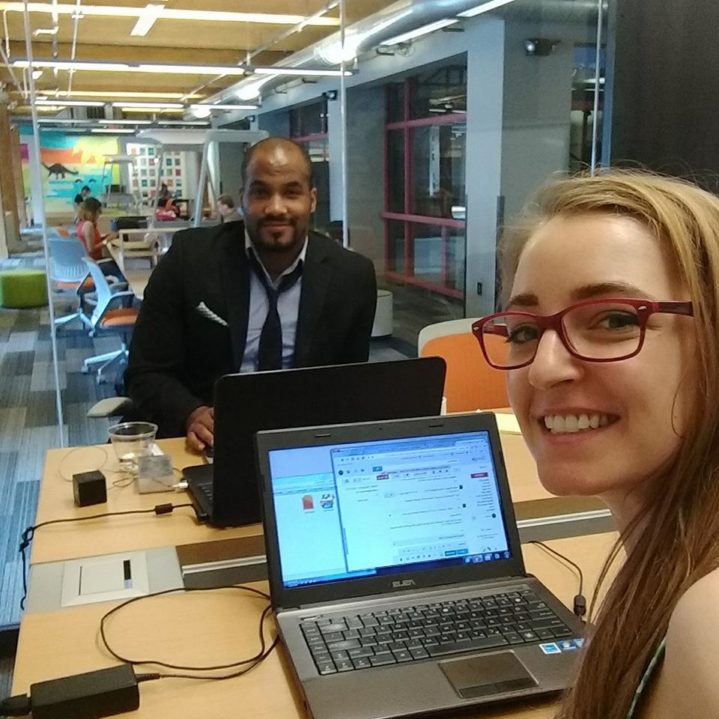 For The Love Of Coworking, New Founders Want to Share Values Across the Midwest

Two strangers met in a coworking space. Hung out. Played ping pong. Founded a company and launched a product in two months.

This summer, two strangers met in a coworking space. Hung out. Played ping pong. And then — inspired by their own experience of finding an awesome and enriching balance of work and play — founded a company dedicated to evangelizing the benefits of coworking for everybody. Meet Multipass, a business travel network that empowers members to work from somewhere infinitely more productive than a hotel room. They’re building coworking marketplace platform to enable anyone to request day-pass access to cool and creative work spaces and places across the country.

In just two months, the St Louis based co-founders, Sarah Schlafly and Christian Johnson, have brokered deals with coworking spaces across eleven cities in the Midwest. Their hope is to make short-term coworking options as accessible to business travelers and startup nomads as Airbnb makes home rental.

Coworking Explained (For the Uninitiated)

Coworking may be a foreign idea to some people as there’s a fairly large cultural gap between the expectations of a traditional office and what these shared work/play style environments offer instead. For starters, most coworking spaces have bars in them. Serving beer. And ping pong tables and arcade machines. Often the only elements that really resemble an office are meeting rooms and even those are usually covered in street art.

Yet, this is where the concept of coworking shines. Share all the resources most companies barely need these days, like printers, faxes, and projectors, and invest the savings into sweet high speed internet access, huge internet-connected TVs, whiteboard walls and enough coffee machines and mugs to keep any expeditionary force marching forward.

Members get to not only save on the costs of essential but rarely used equipment, but also most coworking spaces offer flexible month-to-month leases. All of which means startups, small businesses and even large enterprises, can cut down on their capital expenditure and just get started on growing the company. And as your business gradually grows, your space can grow gradually with you too, by upgrading to successively larger private offices housed in the rest of the building.

Every coworking space has it’s own feeling, and that unique energy is in part created from the design of these workplaces, but mainly from the people present.

On first grok, none of this may sound particularly conducive to getting work done, but as so many can attest to, these are exactly the right conditions for the twin spirits of Inspiration and Innovation to collide into one another and strike a deal.

Multipass co-founder, Sarah Schlafly, was first introduced to the concept of co-working when she was at University in North Carolina. However, the true value of the concept didn’t materialize for her until she returned to St Louis. And that was because there were simply so many coworking spaces in the region.

For Schlafly, the coworking spaces in St Louis, “represent unique information networks.” For product designers, Medici has a creative feel whereas High 44 has more of an industrial vibe. TechShop might suit people who want to tinker with tactile ideas or creative art hacks. By contrast, T-Rex is really tapped into the tech community. “Each has their own flair and special network,” she said.

“I love it because the workspace is so dynamic. I’m a kinaesthetic learner and thinker. Which means that I think and learn the best when I’m moving. I think most people are that way. So, having a lot of different creative spaces to go to and also games that I can play, helps me relax my mind. And when the mind is relaxed, that’s when the most creative thinking comes out.”

She’s not alone in that realization – the BBC has published numerous articles on the creative virtues of “idle moments,” or more correctly, moments not focused on specific outcomes.

To maximize the benefits of this new working style, Schlafly suggests that the mindset of joining a space should be, “I want to know this coworking community. If you go into a space and don’t have this mindset of I am going to put effort into connecting with these people, then it’s just going to be working alongside people. Not authentic cowering, that we’ve all come to love. So, it’s taking a personal interest and taking the time to get to know this people. Really just focus on their needs and helping solve other people’s problems. And that will come back around to help benefit you and your business.”

One of the biggest benefits of coworking for her, was in simply meeting her future co-founder, Christian Johnson. In that moment, that led to the founding of Multipass, they experienced one of the perennial goals of many local economic development agencies – to see what emerges when you just put smart people in a room together – a phenomenon that Travis Sheridan, President of Venture Cafe Global Institute at CIC, calls, “Serendipitous Collisions.”

Two months later, the two of them have launched their own minimum viable product in BETA, got 21 coworking spaces listed on their platform across 11 cities nationwide, have founded their own event series, Innovative Spaces Week, and are now ready to officially launch their product.

Multipass plans to play the role of concierge to anyone looking for the right type of space to work from, when traveling. Their goals are twofold. To make the concept of coworking even more accessible and affordable to anyone, especially those who would never have considered it before, by offering day-passes to try out different spaces. And to offer membership packages to corporations such that their teams can harness the creative potential of collaboration and promote innovation from within their own company, when traveling on business.

Inspired by Airbnb’s business model of monetizing unused inventory — namely free space as coworking office space — Multipass co-founder Christian Johnson said, “eventually we want to be the coworking experts and provide insights and feedback to the spaces we partner with, so that they can understand what’s really working well in workplace design, in general. Also, local governments are trying to figure out the value of innovation spaces too, so we imagine that surveying a network of nomadic entrepreneurs and traveling coworkers, could potentially yield useful data on economic impact and inter-city business trends.”