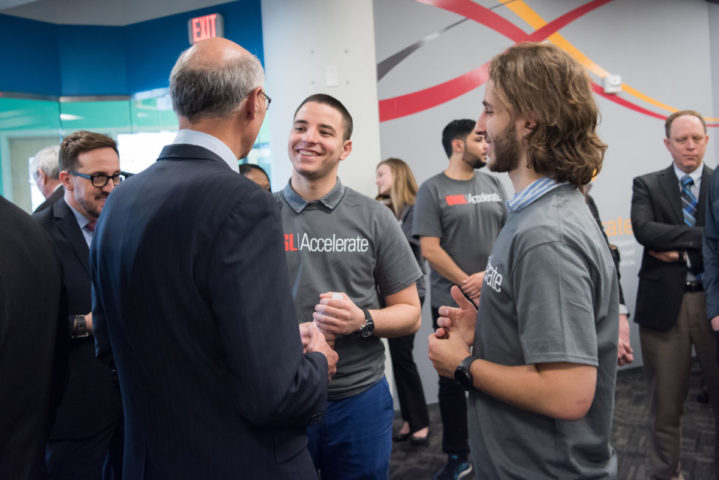 UMSL is transforming education’s role in entrepreneurship with UMSL Accelerate. EQ got a chance to sit down with one UMSL student who has embraced the entrepreneur mindset and, in less than 6 months, has already started developing an Minimum Viable Product (MVP) to prove his business case, thanks to the cross curricular programs available.
“Entrepreneurship is all about mindset,” says Yaniv Dudaie, a junior UMSL student enrolled in UMSL Accelerate’s certificate program. “One has a dream or a vision and they go out to get it.” And “getting it” Dudaie certainly is.

Dudaie’s ultimate goal has always been to own a hotel with a pizzeria attached on the coast of Amalfi in Southern Italy. When his family relocated to St. Louis from New Jersey he was going to be a sophomore in college. He knew from the beginning that he would need to learn how to grow and develop businesses first. Because he was seeking out an affordable school that also had a focus on business, he found UMSL, but he didn’t yet know about UMSL Accelerate or how much his decision would put him directly in line with his dream.

Great Things Happen When You Just Get Started

“I am always challenging myself to do better and be better,” Dudaie says, “so instead of just one major I chose a triple major in finance, logistics and international business, why not add an entrepreneurial certification as well.” He takes 20-22 credit hours a semester, has either been a TA or an intern every semester, is highly involved on campus through organizations and programs, and still manages to maintain high grades.

As a student highly involved in programs and activities around campus, Dudaie’s friend Alex Zvibleman, an entrepreneurial student invited Dudaie to speak in Chris Miller’s social entrepreneurial class answering the question “How Can Someone be a Positive Deviant on Campus?”

Miller’s class is one of several classes available for students looking to obtain their certification in entrepreneurship. Stemming from this opportunity and previously thinking about how active involvement on campus helps with student retention, Dudaie developed an idea to create his first business venture.

Dudaie’s venture has lead him to create an app called FAST which stands for Financial, Academic, Social, Together. The goal of FAST is to solve the retention problem in universities by driving students to afford an education, excelling in the classroom, and engaging socially on campus.

Dudaie’s idea only took form in March of this year and is expected to have a Minimal Viable Product with UMSL as a test school in the next few weeks. In roughly six months, one student’s idea will go from concept to viable business, all with the help of UMSL Accelerate.

UMSL Accelerate’s EIR program allows students to meet with entrepreneurs on a regular basis to talk through ideas and challenges.

Before March, Dudaie had only peripherally heard of the UMSL Accelerate program because of his involvement in the International Business Career Conference where he met Ala Al-Lozi, UMSL Accelerate’s Assistant Director.

Upon hearing his promising business idea, Al-Lozi introduced him to the Entrepreneur in Residence Program (EIR). There he met Daniel Fogarty of LaunchCode, who showed him how to build a business case and focus on his main goals.

“I had the personal drive to find the next thing for me, but I didn’t know the next steps to take,” Dudaie explained. “Daniel really showed me the fundamental bricks I needed to build the business.”

From Nowhere to Somewhere

UMSL Accelerate is truly a cross-curricular program where any student on campus can benefit from what it offers.

UMSL Accelerate has an Entrepreneurial Club (EC), which Dudaie happened upon while continuing to work through the steps of creating FAST. The club was hosting an event for branding and marketing strategies, and seeing it in action, really cemented a sense of purpose.

Knowing he wanted to be more involved in entrepreneurship, Dudaie joined the club and quickly became a major proponent of the value of the community and getting more students to see the value in participating in entrepreneurial mindset activities, no matter their major. He’ll be Vice President of the EC this coming school year.

Dudaie’s drive is obvious, so of course his involvement doesn’t stop there.

When he learned about UMSL Accelerate’s Entrepreneurial Scholars & Interns Program (ESIP) he applied and was accepted. As part of ESIP, Dudaie receives a scholarship to take three to four entrepreneurial classes and $4000 for a summer internship with a startup or an entrepreneur with a new venture company.

ESIP Scholars also collaborate with the other recipients from the University of Missouri’s system to not only receive the fundamental aspects of entrepreneurship through classwork, but also the out-of-class, hands-on, and collaborative real-world education. In addition to the aforementioned achievements, all of his previous experiences with the UMSL Accelerate program has helped Dudaie earn a place as a student intern for UMSL’s partnership with Ameren Accelerator.

To earn a spot in this program, Dudaie had to complete a 4-minute interview which made him hone in on how to sell himself, showcasing the soft skills that will help him and his business succeed. In this partnership, Dudaie, along with other UMSL students will meet and learn from Ameren executives along with other entrepreneurs in energy startups.

That support network will also continue to build on the entrepreneurial lessons Dudaie will need to see his ultimate dream —that hotel pizzeria on the Southern coast of Italy— come true.

Maybe Yaniv Dudaie is an exception, but UMSL Accelerate really does have a model to help students take leaps and bounds just by utilizing the programs and classes available, and choosing to get involved.