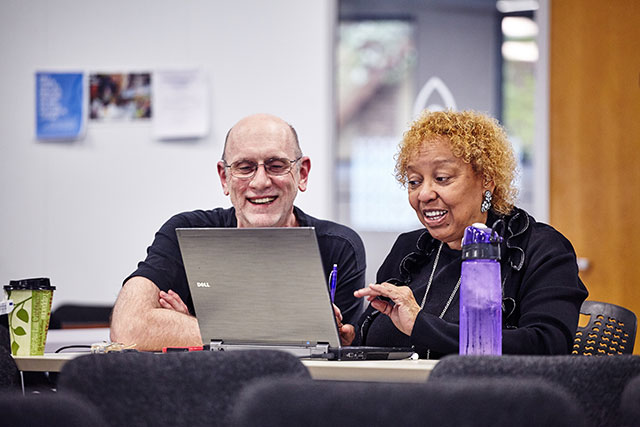 How Washington University and LaunchCode are partnering to take on the tech talent gap in St. Louis.

Twenty minutes before class began on a Tuesday evening, the LaunchCode Mentor Center’s main instructional room was quietly filling up with early arrivals to the CS50x class, a 16-week, in-person version of the introduction to computer science class offered online by Harvard. The only things breaking the silence were the sounds of an arcade basketball game in the building’s entryway: swoosh, thump. Swoosh, thump.

Student Jarrod Sharp had arrived from his full-time job as a medical biller at a hospital in Belleville, Illinois and was preparing to be on his game for the 5:30pm class. He’d seen on social media that fellow East St. Louisan LaShana Lewis, who completed a LaunchCode program, eventually became a system engineer at MasterCard and then met President Barack Obama, and thought to himself, “Well, now you’ve got my attention.”

Created by Jim McKelvey, co-founder of Square, in 2013, LaunchCode exists to address both the issue of overwhelming unemployment and a giant tech talent gap.

In one year alone, the program has resulted in 140 new computer programming jobs in St. Louis and more than 1,000 people in the region utilizing the educational programming offered.

For the course in which Sharp is enrolled, Washington University’s School of Engineering provided funding for current undergraduates to serve as teaching assistants, supplementing lecturer Doug Shook’s lessons. Ron Cytron, professor of computer science and engineering at WashU, added LaunchCode mentoring to the list of possible assignments for TAs last fall.

“There was a nice, strong response. LaunchCode is viewed as cool, and there’s an infectious enthusiasm about it, which spills over into getting others to participate,” he says.

“There were some preconceived notions about mentoring adults—that it was scary. As they’ve been doing it though, they’ve found it wonderfully rewarding.”

Ari Spilo, a junior majoring in computer science and finance, is one of the lead TAs. “Fifteen students come every Tuesday and Thursday,” he says.

“After the lecture, the students work to increase their familiarity with the concepts before trying the lab projects. We roam the lecture hall and help with the labs.”

According to Aaron Bobick, dean of WashU’s School of Engineering & Applied Science, LaunchCode presents two distinct opportunities for the university. First, it offers TAs a way to get off campus and engage in the community.

“Washington University undergrads are a remarkable collection of people,” he says. “They are a deep and capable group, and providing them with the opportunity to learn what it takes to teach different types of folks aligns with the notion of producing a broader graduate.”

Spilo, who embodies the kind of undergraduate to whom Bobick is referring, got involved with LaunchCode through his studies with Cytron and says that the TA program is an asset to LaunchCode’s coursework.

“One of the things the LaunchCode students struggle with is getting help outside of the general lecture. There are materials available online, but I don’t see that as sufficient as having time outside of class to get help. We provide actual students that can help and talk them through at a deep level,” Spilo says.

With a limited technical background, Sharp says his coding journey has been made much easier by having access to the TAs. “First, they’re very intelligent,” he says. “They study advanced concepts, and I’ve yet to stump any of the WashU mentors.”

“It’s a very diverse range of people, but I like how they’re different. You could talk to three different mentors and get three different answers, and they’re all correct. You learn more than one way of doing things.”

LaunchCode CS50x student Amy Wallhermfechtel agrees that having the additional help from the WashU TAs has been important for her success in the course this spring.

She received a Ph.D. in history from Saint Louis University in 2014 but has been discouraged by the increasingly limited academic job market. To catalyze a career switch, she attempted to complete the course through the edX website last year but got stuck.

“I kind of hit the wall both in terms of accountability and my schedule with other things,” says Wallhermfechtel. “I had made it through the first three problem sets, but having this collaboration with WashU, where I can come in and have access to mentors, has made all the difference.”

The second opportunity presented by LaunchCode for WashU, according to Bobick, is to contribute to the field of computer science education.

“Ron Cytron knows more than most about computer science education,” Bobick says. “It’s been a focus for him because of the increased enrollments in computing and teaching computing to non-computer scientists.”

“Washington University has an introductory computer science course that’s met with a lot of success and that’s been taken by a lot of different types of students,” says Cytron. “I thought, ‘Why don’t we try to use that as another vehicle to get students ready for jobs at LaunchCode?’”

A version of Cytron’s introductory class will be offered this summer through LaunchCode and will go into more computational depth than CS50x. Cytron says, “The Harvard course provides a sampling of five to six different languages; this is a tasting menu.”

Zach Lou, education director at LaunchCode, is seeing a lot of what he’s worked for come to fruition with the WashU collaboration. A 2012 WashU graduate with a philosophy degree, Lou got involved with LaunchCode as a volunteer in 2013 and hasn’t looked back.

“The CS50x class was the thing I was most passionate about. Being a part of it—witnessing the transformation people went through—made me want to continue to make those sessions a part of what LaunchCode does,” he says.

When asked why he supported the collaboration project with LaunchCode, Bobick referred to what he calls the “Five R’s”: research, reputation, revenue, really cool and the right thing. “Sometimes, you do it just for the last R,” he says.

“I know that in some circles, LaunchCode is thought of as a community-driven effort for social good, but there is a part of it that’s a much more fundamental economic question that has to do with retraining people with skills aligned with today’s market needs. The world has shifted in terms of passions and opportunities.