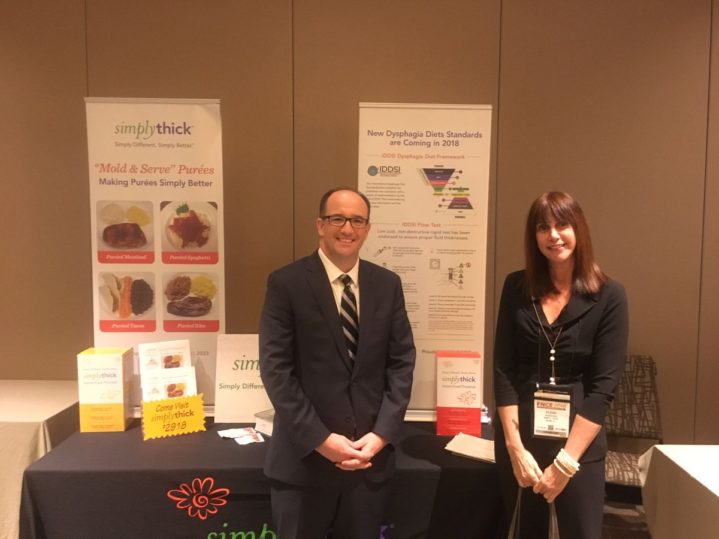 A decision matrix that hinges on a single question.

John Holahan sits down across from me. He carries himself with a composed tension that says poised and nervous all at the same time.

There’s nothing, so far as I know, for him to be nervous about. We’re just meeting to talk about the SimplyThick company story; mistakes made, lessons learned, milestones achieved. In particular, I want to know about some of the difficult decisions he’s had to make as a founder and CEO, and his thought process for making those decisions.

Then he begins and I understand. In 1997, he says, he was arrested in New Jersey for a DWI. That moment when the handcuffs clicked, something else clicked for him as well.

He was happily married, working as a sales engineer at Monsanto, and his life seemed fine. But when he came home and told his wife he wanted to enter rehab he learned that she had actually been considering a divorce.

He put himself through rehab and joined a 12-step program. At his next review his boss told him she’d never seen someone grow so much in one year and that she had recommended him for the Executive MBA program at Washington University’s Olin School of Business

A lot happened while he was pursuing his MBA. His wife got pregnant, his employment with Monsanto ended, and he discovered a principle that would guide him unerringly through difficult decisions.

He also started a business. He hadn’t enrolled in the MBA program to become an entrepreneur. But he’d made the decision to take Entrepreneurship as an elective class and his team needed a business concept they could develop. John remembered a colleague who had come to him and asked if he had any ideas that would help her mother drink fluids. Her mother had dysphagia, a swallowing disorder, and was refusing to drink anything thickened with the products that were available. Now, needing a business idea, he told his team the story and that he’d like to experiment with formulas using xanthan gum as a thickening agent.

They loved it. He got investments from one professor and two fellow students, and SimplyThick, LLC was born.

Then came a tough decision. He was offered a fantastic position with Express Scripts. But taking it would have meant abandoning his budding company. He turned it down.

He’s faced a lot of difficult choices since then. Perhaps the toughest was making the decision to collaborate with his competition when he realized that the other company had one-upped him in their delivery system.

John had always been adamant that a liquid thickener was superior to powders, but his product still required shaking or vigorous whisking to reach ideal smoothness. It had better texture, and better flavor (which in this case means no discernable flavor at all) but it wasn’t easy to blend. The other company had achieved a product that could be stirred in with a spoon.

“We could have sold against it,” John says, “but I decided the right thing to do was to work with them instead of against them.” As a result, the new SimplyThick formula retains the ideal properties of texture and taste, but it can be blended into any liquid, hot or cold, by gentle stirring with a spoon.

A Decision Matrix that Hinges on a Single Question

Which brings us to that principle for making difficult decisions. As anyone in a 12-step program knows, a part of the program’s success is prayer and meditation. John always brings one question to his inner practice: “What is the next right thing to do?”

For John, that “next right thing” can’t just be the most profitable choice, or the safest choice, it must also be the choice that benefits people the most. Faced with a decision of selling against his competition or licensing their formula, that criteria simplified his choice.

Not only has Simply Thick secured an enviable market position, the new formula improves lives in immeasurable ways. Of course, it’s easier for nursing professionals, caregivers, and patients to work with, but John’s real motivation was knowing that it could be added to any liquid unobtrusively, avoiding inconvenience or even embarrassment for anyone dining in public or with guests. He envisioned people who once had to think twice about even having coffee or a beer with friends now being able to easily “fix” any drink so that they could safely consume it and knew that was the “next right thing.”

Where the answer comes from is up to you to interpret.

Higher power, higher self, or human conscience. The key is that John takes action based on the answer he receives. And then he watches for results. He believes that if he got it right it will help people and the world will support his choice. If not, he tries a new iteration.

If you go around asking people what they are passionate about (and I have) you’ll find that most of them begin their answer with, “I’m passionate about helping …” So making decisions based on the principle of helping people is nothing new.

And most of us are familiar with Dr. King’s famous quote, “Take the first step in faith. You don’t have to see the whole staircase, just take the first step.” So just looking for the next right thing, although not always easy, is nothing new either.

Most of us have been told that taking risks is most likely to result in the world laughing at us and rejecting us. We’ve been told that doing the right thing is a battle, one worth fighting, but a battle nonetheless. We watch for that, we expect it. What if, instead, we watched for the support and used that as a guide?

It is not the answer I expected, but it is exactly the answer I needed. Certainly, it’s worked for John, both in his personal relationships and in building his business.

It was even the question he asked himself when he had to weigh out the risks and rewards of a “secure” position versus pursuing the dream of being an entrepreneur.

I know it can’t have been easy for him, deciding to share this story with me so that I can understand just how deeply this decision-making principle affects his daily life. I also know that one of the reasons he’s sitting down with me, pulling his resolve together to tell me this story in this way, is that I know a little of what it’s like to share publicly things that some part of you would rather never speak of again.

We’ve talked about those choices that I face. Especially my decision to go public with my history of abuse and survival. So I also know, at some level, he’s ready.

I know he means that he’s asked for the “next right thing” and telling me his story, letting me share it, is the answer he received.

Personal Stories Empower Others in Business Too

I think back on my own fears, my resistance when the few people in my circle insisted that my history with abuse was part of my success story and could help a lot of people if I would only share it.

It’s been more than eight years since I took their advice and started speaking and giving interviews on my journey from survivor to wholeness. In that time there have been battles, but when I take John’s advice and look at how the world has responded it has been overwhelmingly supportive.

In telling me why he believes it is time for him to tell his story, John referencedan article I wrote for Forbes, reminding leaders that based on statistics alone they probably interact with multiple survivors of sexual abuse every day whether they realize it or not. If he looks at statistics for recovering addicts, he says, about one out 100 people have a history of some kind of substance abuse.

He’s considered what hope and sense of fellowship it might give people, in his organization, among his vendors and customers, even for people he has never met and will never meet, to know his story. And he’s decided that making his story public is the next right thing to do.

I wonder how those statistics will change, both of survivors of sexual abuse and substance abuse, when there is hope and compassion instead of ridicule and shame for those telling their stories.

Already the #MeToo movement has changed how stories of abuse are received. And while there has been tremendous backlash, when I look at how the world as a whole has responded the support has far outweighed the resistance.

As our brains are wired to react to threats, it’s easy and natural to focus on the negative responses. But decisions made at a higher level of consciousness must weigh the good achieved and the level of support received in judging the success of any decision.

I know that John will be watching, not for the resistance which he may well get, but for the support, the reinforcement that his story helped someone and possibly moved the business world a little further along in understanding and supporting those who have some of this story in common. And I believe he will see what he looks for.

I’ve been reminding myself to evaluate my personal and professional decisions, past, present, and future, by weighing the support, the votes of confidence, and reminders that my choices make a difference, a positive one, in the lives of others. And I’m frequently surprised, even stunned, to realize how many decisions I agonized over that could have been so much simpler using John’s “next right thing” question.

I hope you will use this as an invitation to do the same. And let us know how it works for you.