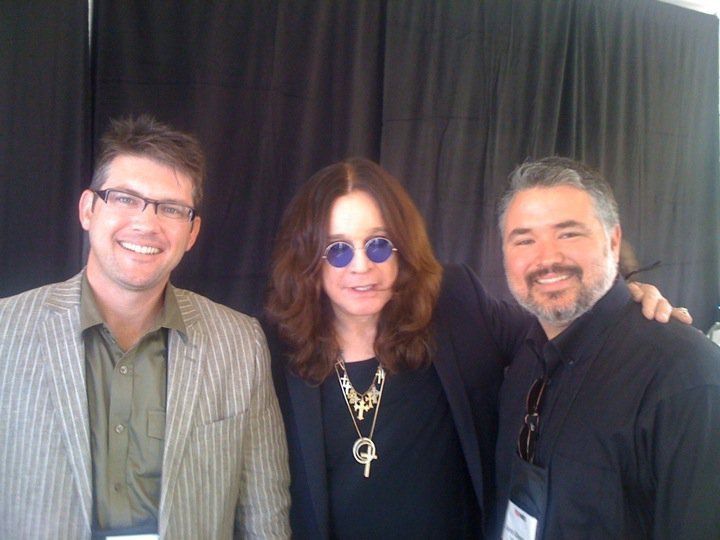 After leaving the world-renowned Genome Center at Washington University in St. Louis, Jarret Glasscock co-founded Cofactor Genomics, which has been at the forefront of sequencing and analysis of DNA for researchers worldwide.

After leaving the world-renowned Genome Center at Washington University in St. Louis, Jarret Glasscock co-founded Cofactor Genomics, which has been at the forefront of sequencing and analysis of DNA for researchers worldwide. Jarret and the Cofactor team aren’t afraid to disrupt the academic world of genomics, whether it’s partnering with Ozzy Osbourne, moving into the exciting new world of RNA analysis or becoming one of the first biotech firms to be part of Y Combinator.

Tell us about the selfie you sent for use with this story—where did you take it and what’s interesting to you about it?

It’s me with one of my two co-founders, Jon Armstrong, and Ozzy Osbourne. It was taken at the TedMed talk in 2010 in San Diego, where the results were released about what could be learned from Ozzy’s genome. The idea was we usually study sick people’s genomes. In this instance, we were studying somebody who’d put their body through a litany of abuses and was still going strong. The bigger story behind this picture for me is that it represents a time in society when genomics was becoming part of an individual’s story. Ozzy’s story, my story, your story.

Many people think DNA is the blueprint of life. What’s so important about RNA?

DNA, like the blueprint for your home, never changes. RNA changes in relation to your health, lifestyle and infections you’ve had. DNA points to the risk you have of something over your lifetime. If your pipe burst, you wouldn’t hand the plumber the blueprints—you’d let them wander the house looking for the changes, the leaks. With our expertise in RNA, this creates a huge opportunity to move into personalized medicine.

What is it like to be part of Y Combinator?

Intense, exhilarating, a certain amount of pride that comes from being part of such a great group of people. Jon Armstrong and Dave Messina (Cofactor’s cofounders) and I got to be part of it for three months. It was amazing to see how fast tech companies get a product to market.

When do you do your best work?

Mornings. As a general rule, I reserve mornings for strategy and creativity. The afternoons are for meetings and execution. Those mornings prepare me to be effective the rest of the day. I’ve heard that Mark Zuckerberg doesn’t schedule more than 50% of his time, either.

My mom always taught me that if I’m not energized and inspired, I can still change my perspective when things get hard.

Beyond education, what prepared you for what you’re doing now?

I grew up in the West in Arizona and California skateboarding on a team. You have to visualize a trick and spend 90% of your day falling on your face before you can nail it. That’s a great metaphor that’s served me as a founder.

It would have to be something where I surrounded myself with passionate people. Like how we’re helping with the Northern White Rhino, sequencing the last male and last four females to help understand if approaches like in vitro fertilization can help save a species. We could do a lot more if we had the money to not worry about cash flow, looking at things besides the diseases of North American white males.

What’s your vision for Cofactor Genomics?

We just received $1.5 million from the NIH for molecular biology related to 60 diseases and we added a medical director. We’re moving into interpretation, and we’re moving into being able to be a solution partner from sample to interpretation. For personalized medicine, that means looking at individuals based on what their RNA is today, not just what their DNA sequence was at birth.

What book(s) have influenced your life?

I read a lot of non-fiction, a lot about the rise and fall of a startup. The more nitty-gritty about the challenges, the better. Ben Horowitz’s The Hard Thing About Hard Things really addresses that. That you have a person worth $3 billion where he talks about his failures and what went wrong is awesome.

New Mexico green chile. I like to get it shipped from Hatch Valley, NM, where they roast it on the roadside and ship it all over. I was born in Gallup, NM, and lived between the Zuni and Navojo reservations. My mom is Navajo.

We’re reaching this time when we have all these technologies and tools, but it’s not easily accessible to the individual. In healthcare, with a more informed and engaged population—contributing to that cause motivates me.

I’m kind of the opposite—I get the most done on the days I lose my phone. If I can stay away from email, I’m much more productive.

What’s your go-to tool for the tough stuff?

There’s a term that we use, “the elephant keeps walking, the dogs keep barking.” You have to have a vision and keep to it. I learned from the people at Y Combinator that even the brightest talk to 20 “no’s” for each “yes.”.