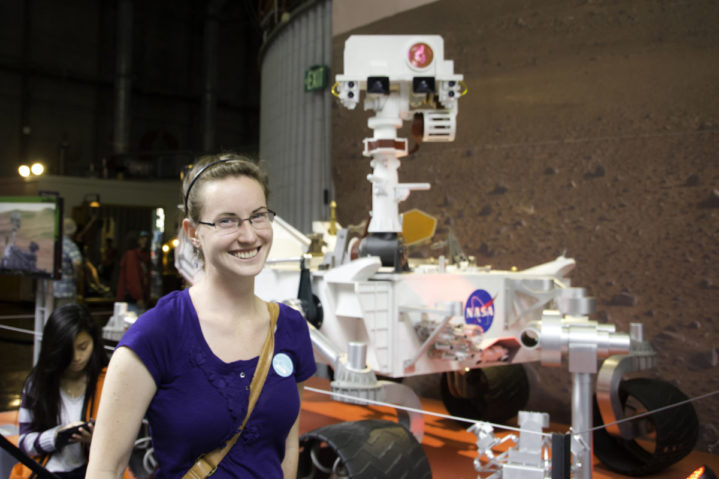 With water discoveries and blockbuster movies, Mars is the planet everyone's talking about these days. Valerie Fox works in Washington University's Earth and Planetary Remote Sensing Laboratory, where she helps understand Mars and explore it.

With water discoveries and blockbuster movies, Mars is the planet everyone’s talking about these days. Valerie Fox works in Washington University’s Earth and Planetary Remote Sensing Laboratory, where she helps understand Mars and explore it. She also helps everyday people become more familiar with what might be our second planetary home by helping the Saint Louis Science Center develop its new Bridging Earth and Mars (BEAM) exhibit, opening this November.

What interests you about Mars?

Mars looks red to us, because the surface is oxidized—it’s literally rusting. When Curiosity drills a 5 cm hole like it does, you see that that oxidation layer is very shallow; the rock underneath is gray or white. At some point in Mars’s history, there was enough of an oxidation agent—oxygen, water, whatever—to oxidize the surface. When, how and with what is a great current mystery.

What does Mars tell us about Earth?

Mars doesn’t have plate tectonics like Earth, really Earth is the only known planet with plates on the surface that create mountains and continental drift. It makes it interesting to see Earth as the anomaly.

Any interest in actually going to space? To Mars?

Not to Mars, it’s too far away. I think you need two sides in space exploration: The robotic and human sides—and they complement each other. I’d love to go into orbit, but I want all the resources of the lab on Earth, too.

I’m in my fourth year of my PhD. My research is all about the aqueous history of Mars. I use data sets from our orbiters to find interesting areas to guide the surface rovers Curiosity and Opportunity to study. For example, some of my research revealed the presence of clay in the Marathon Valley, where Opportunity is currently exploring, which is a big deal because clay requires water to form.

Tell us about the image you sent for use with this story—what’s interesting to you about it?

It’s a full-size mockup of the Curiosity rover at the Exploratorium in San Francisco. The picture dates from around the time of the actual landing, so that’s kind of cool.

The majesty of the world. When I open my laptop and can be looking at the surfaces of other planets, that’s my day-to-day motivation. They’re beautiful and intriguing and that’s how I get to spend my day.

My parents are both ceramic artists, they have their own studio business and make their own clay and glazes. By 8th grade I was helping them make glazes, where we used the firing process to create Willemite, a mineral that occurs in nature too, to make a glaze that was crystalline, really using chemistry and process. By the time I got into studying geology formally, I felt familiarity with the ideas right away.

Pluto (laughs). My research has been focused on Mars, but this year has been amazing with cometary landings and a Pluto fly-by. I’m also into crochet and ballroom dancing. Crochet is a thing where using a lot of different variables you can make something simple like yarn or string into a huge variety of things. I make a lot of my own patterns, they’re mathematical and fun and therapeutic.

I want to have helped continue to send robots to other planets to learn how they formed and how life might have emerged. I hope I will have answered some of those questions.

Who are your favorite artists, authors, musicians?

I read a lot of science fiction, Asimov and Heinlein. Asimov really made non-fiction science approachable, too. Andy Weir’s “The Martian,” obviously, and the movie they made from it. Seeing it was like, “oh, there’s that thing I do,” or, “oh, there’s that place I’ve studied.”

I love videos of animals in the wild (nature documentaries). “Planet Earth” was great, even cat videos, although panda videos are really cool.

What keeps you up at night?

Whether or not we keep funding planetary science. Every two years a mission is up for Congressional review, and having a political climate that my future career is wrapped up in can cause stress.

What’s your go-to tool for the tough stuff—and what is tough for you and why?

When a person from the general public finds out that I’m a planetary geologist, they can say, “Oh, you must be so smart,” in a way that indicates they’re shutting down and thinking it’s beyond them. That’s why I care about outreach and education—science doesn’t just have to be for the scientists. The other tough thing in science is that you have to defend what you discover to others that try to pull it apart—that’s how science works. As a young scientist, you just have to learn to deal with that.

I’m pretty private, but I follow the Planetary Society, where they have a pretty good pulse on what’s happening. Emily Lakdawalla writes there and I think she also really makes it relatable to everyone, and she’s got a great style.