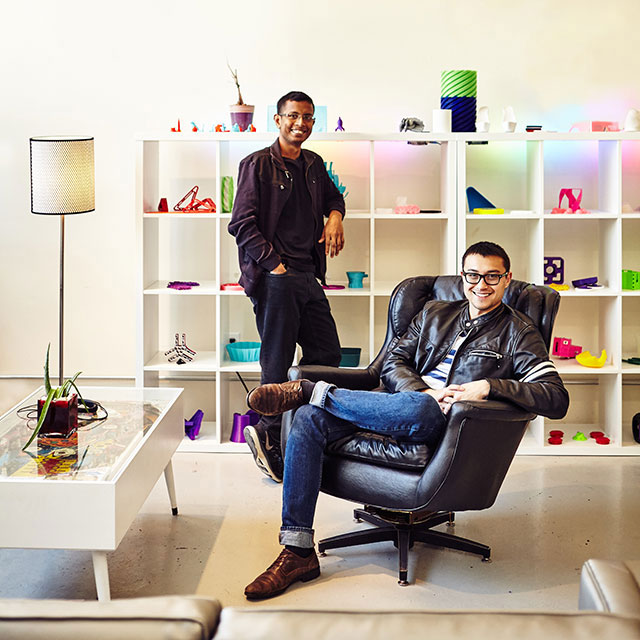 Thinking Inside the Box

At Squarefruit Labs, they're creating products in ways no one else is—one layer at a time.

Chico Weber’s hand runs along the colorful, 3-D-printed objects lining the shelves in his company’s Central West End office before settling on a chain mail mesh. As he talks, he shifts it absently from hand to hand.

A few feet away from the shelves is a bank of 3-D printers that look like small microwaves without doors. Across the room is a larger 3-D printer, the showpiece of the workshop. The Squarefruit Labs team assembled and programmed it themselves. But simply using 3-D printers isn’t what makes Squarefruit Labs unique. Instead, its edge comes from the way the company uses the printers to make things other companies need.

Weber himself will tell you that he’s a hands-on builder in a tech-startup world, which makes him a bit of an anomaly. The coding and server-side of the business is important, of course, and his partner at Squarefruit, “BK” Bolisetty, is the IT guy. But it’s the actual printing of tangible stuff that makes Weber’s eyes light up.

Additive manufacturing—laying down successive layers of material to create an object—lets companies breeze past some of the barriers they run into using traditional techniques like machining and die casting. Because computers control the process, it’s easier to automate, and it lets engineers and designers go beyond existing limitations with techniques and materials.

Weber describes his business as having two parts. The part that pays the bills is essentially a consulting business that offers rapid prototyping, which means using 3-D printers to create everything from hydroponic gardening systems to actuators for controlling motors. The second part—this is the inspiring one for Weber, the one he feels gives the company a true competitive advantage—is retail sales of actual products. Think robots, furniture and clothing.

“It’s always harder for a hardware company to get off the ground because there’s a different level of overhead.”

To do 3-D printing well, a company like Squarefruit needs expertise in photopolymers, optics, lasers, manufacturing, industrial design, mechanical and electrical engineering and software development. Not only does it need to understand the end product and its uses, it needs to be successful at data transfers from the designer. Finally, if the prototype is successful, the company needs to deliver the information to the end manufacturer. Weber’s bachelor’s of science in manufacturing engineering from Southern Illinois University Edwardsville gives Squarefruit a leg up here and so does Bolisetty’s master’s degree in industrial engineering, also from SIUE.

This summer, the duo will officially venture into retail sales for the first time with a robot they’re calling Persona. The spherical case, printed in one 14-day run in the big printer, is designed to house circuitry and components to make it a personal, mobile droid (alternatively, it could be called an unmanned vehicle or simply a personal assistant).

“The number one question I hear is, ‘Can it go fetch a beer?’ And it can!” said Weber, laughing. He explained that the six articulating legs that carry the sphere let it do things like pick up objects and perform repetitive tasks—and, yes, fetch a beer. It will also have cameras, Wi-Fi, speakers and other functional components for which enterprising customers can find their own creative uses. Weber says the robot will be an open-source software model, so people will be able to come up with their own apps and individualize how they use the robot for retail, public safety, office or home settings.

Weber also has plans to upgrade Squarefruit’s large printer in the coming months by shifting from the current technology, which melts spools of plastic to inject tiny lines that layer together, to ultraviolet curable resin. The switch would increase their printing speed to an inch per hour, meaning they could print two robots per day, while giving them smoother, more durable results. “It’s a huge leap in printing technology,” Weber said.

Set Up for Success

Working on Persona during the past year and a half has challenged Squarefruit to continue to refine and streamline its printing capabilities. It’s been a long learning process, and it hasn’t always gone according to plan: Some delays were related to changes in the end product itself and others brought about by the company’s decision to fund its R&D through sales rather than investors.

“We would have launched earlier if we were just doing one robot,” Weber admits. And, he adds, “It’s always harder for a hardware company to get off the ground because there’s a different level of overhead.”

But the upside is that their business model allows them to service a lot of companies simultaneously and collaborate on big projects with multiple partners. This helps make up for the scarcity of similar prototyping companies in the St. Louis area. On the east and west coasts and in Europe, 3-D printing already has an established scene, which makes everything from price comparisons to product testing easier. Plus, if a company rises above the competition, more people are aware of it.

For now, the main movement on the local scene is TechShop, a membership-based chain that offers industrial-grade equipment for 3-D printing as well as woodworking, welding and more. It opens in August in the Cortex district for entrepreneurs, hobbyists and anyone else who wants to make stuff.

Before he became a professional who builds things, Weber was an avid hobbyist, first with Lego and K’nex sets, then with the tools in his grandfather’s basement shop. Eventually, he was on Rockwood School District’s robotics team. “They were not award-winning machines by any means,” Weber recalls, “but I definitely learned a lot that still applies to me today.”

His knack for sketching led him to learn CAD software so he could design more realistic-looking product sketches. In college, he gravitated toward manufacturing, where his interests, he says, were energy systems and figuring out better solutions through design. As his thoughts turned more toward ways to make cheaper wind turbines and less to his coursework in manufacturing systems, “I became a B and C student,” he laughs. “I was focused on the business.” His professors noticed and encouraged him to pursue his own direction.

Although companies like his could be perceived as a threat to traditional manufacturing, Weber says that hasn’t been his experience. “Others in industry see it not as a competitor but as a way to streamline their process,” he says. “If they don’t have to go through the traditional injection molding process, it opens up opportunities because manufacturing costs less.”

Additive manufacturing requires a great deal of precision, just like traditional manufacturing, but the risks are lower because the costs are lower. Squarefruit’s main expense are motors, but plastics play an important role. It means “it’s a few hundred dollars to get a prototype instead of tens of thousands,” Weber says.

For example, one of the leaders in 3-D printing, GE Aviation, recently started using an additive process to make nozzles for jet airplanes. Each one is built in 20-µm-thick (that’s micrometer) layers from a bed of cobalt-chromium powder. Laser beams hit the powder and melt the metal alloy in tiny increments.

This use of a powder plus a liquid “glue” or binder is yet another type of 3-D printing— one that Weber has experimented with himself. In fact, his senior design project at SIUE involved a much tastier powder: chocolate.

The examples go to show the vast range of possibilities for end products. They also provide a little more context for the company’s name: Weber compares 3-D printing to “growing” something inside a cube—and it could actually be something edible, sort of like the square watermelons Japanese farmers perfected by growing them inside boxes.

“Squarefruit is about ‘growing’ products in a way that is more attractive, efficient or appealing— taking what nature provides and redesigning it.

Because the bulk of Squarefruit’s business is in consulting, they never know quite what will come at them next: Both the end goal and the level of precision a customer can provide up front vary. “It depends on the client and how much they’ve already developed before bringing it to us, which can be good or bad,” Weber said. “Sometimes they send fully designed components, but we can’t use them. It might have to do with file format, or sometimes the tolerances aren’t set up for complex assembly. Some can’t be edited. Some need to be redesigned.”

Weber said it’s almost better if a company comes with just an idea and collaborates on the design. This is what happened with a longtime partner, Beloved Streets of America, and its local group of nonprofits who are working on hydroponic urban “farms” to grow fruit and vegetables outdoors to fight food deserts. “They don’t have an engineering background, and that’s why they hired us,” he says.

“I know how to grow things in the ground when they’re in season,” Weber jokes, but the challenge of mastering all the variables intrigued him. He got to know the industry through the process of designing and printing the intricate modular boxes where the plants would grow as well as the sensors to determine things like soil consistency, minerals, moisture and oxygen levels in the air.

The hands-on engineer was just as enthralled with the results as anyone else when they finally got some basil and tomato plants to survive. Now, they’ve grown wheatgrass, parsley, cilantro and more, and they’re working with restaurants in the Central West End who might want to add the produce to their menus.

Making parts for a sustainable, scalable urban garden might seem totally unrelated to making parts for jet engines—but it’s not. Weber thinks most industries share the same desire to tackle source-related issues. “They’re looking for cheaper ways of producing solutions,” he says. “The best way to move forward in new types of manufacturing is taking a 3-D printer and using it as a replacement to traditional manufacturing or as a supplement to it.”

At age 26, Weber is already a recognized expert in his field. He has spoken to groups like the Midwest Manufacturing Leaders, who are also well aware that other areas of the US—and the world, for that matter—are ahead of our region when it comes to dynamic clusters of cutting-edge manufacturing companies. But because the St. Louis region has seen a downturn in traditional manufacturing, especially over the past six years, the time might be right for a shift.

Weber isn’t advocating for 3-D printing cars, at least not yet. But he does point out that there are plenty of opportunities amid economic challenges because they open the door to creative thinking and new perspectives. Even the name of his company gets at this mindset, he says. “For us, Squarefruit is about ‘growing’ products in a way that is more attractive, efficient or appealing—taking what nature provides and redesigning it.”