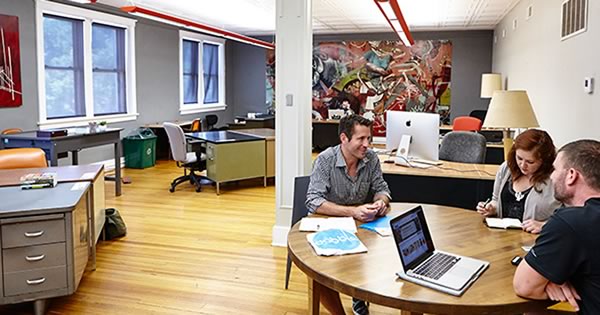 Just off the heels of National Coworking Week, we bring you a baker's dozen of St. Louis spots for dropping by and docking in or renting space to be amongst kindred spirits. Major players like T-REX and Cortex lead the way in fostering innovation, while more idea centers and co-working spaces take up residence in STL's growing entrepreneur community.

This article is outdated. Here is a more comprehensive guide to St. Louis Coworking on EQ.

In the friendly Midwest, collaboration is not only practiced but encouraged among the city’s growing small business network.

Here’s a baker’s dozen of St. Louis coworking spaces for dropping by and docking in or renting space to be amongst kindred spirits. We spotlighted four spaces in-depth and featured a sidebar list, which is featured below.

TechArtista’s name gives you a bit of an idea of what role they play in the community. With a focus on growing businesses, but also creative people and processes, the venue is a breathtaking place to work—from its intriguing architecture and murals to the caliber of companies it attracts.

Sharing an address in the Central West End workspace are Solea Water, a company looking to address the global water crisis by sourcing funding through shoe drives, fundraising campaigns and volunteerism; Linkship, a company innovating a new way to save, share and organize links; and Hearing Our Way, a magazine designed for kids and teens with hearing loss, among others.

Nebula has been available to the small businesses of St. Louis since 2010, making it one of the first co-working spaces in the city. With 87 businesses currently using the space—and an even longer member list—Nebula houses more than its fair share of innovation.

Take, for example, Griffin 3D, which aims to be the first company from St. Louis to produce and sell 3-D printers, with the goal of making them affordable to everyone; Uke Go Girl!, a weeklong workshop that empowers girls to explore creative expression and build self-esteem through playing ukulele; and Context Industrial Security, which specializes in the cybersecurity of industrial control systems, such as those that control the electricity that powers our businesses and homes.

Industrious brought its nationwide concept to St. Louis this summer. Though each elegant space—in Chicago, Nashville, Denver and other cities—takes shape differently, they all offer the luxurious option for small business.

Private offices, cleanly organized and separated by glass walls house, among others, The Head Case Company, a company developing technology to help monitor and prevent unnecessary damage caused by concussions; Garbshare, which is developing virtual closets; and Town Coopers Baseball, a baseball league.

Kelsey Waananen
Kelsey writes and serves as Managing Editor for ALIVE Magazine. She previously contributed tech, pop culture and news articles to Newsy and Examiner.com. A Colorado native, she ventured to the University of Missouri for college, graduating with a degree in convergence journalism.