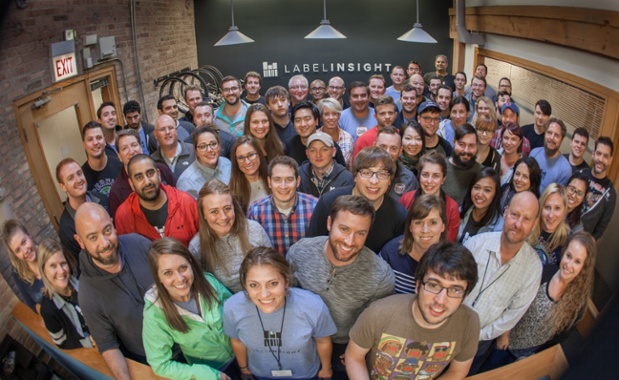 Getting a Move on: How Label Insight Found its Path to Growth in Downtown St. Louis

Label Insight wasn't always a multi-located, 70+ employee company that creates strategic alliances with big names such as the FDA and Nielsen. Here's their growth story in Downtown St. Louis.

In December, 2013, Label Insight and T-REX parted ways. The company, after a year-long stint incubating at T-REX, had grown exponentially.

It was clear that after raising millions of dollars and doubling the number of employees, Label Insight was ready to grow into its own space. But striking out on their own in no way meant dissolving the close ties they developed with T-REX; it would become quite the opposite.

The rate of growth Label Insight experienced had much to do with environment. Co-founder Dheeraj Patri shares credit with the community of which he had become a part.

“Really it was the desire and commitment by Arch Grants and T-REX communities to get us more involved. The community really propped us up and forced us–to the best of their ability–to be as successful as we can [be],” he said.

So to continue their rapid growth Label Insight had to do two things: move out and stay close.

Label Insight, now growing by leaps and bounds, focuses on deeply understanding the makeup of all Consumer Packaged Goods (CPGs). This includes everything from food to shampoo.

“We look at ourselves as a cloud product label data refinery platform,” co-founder Dheeraj Patri says. “And what we do is we take this datum and we digitize it. By looking at patterns in this data, we are able to understand deeply what is actually in a product.”

This is significant because Label Insight’s customers are in the industry. Their work is not to dictate to any entity what to or to not do. It has no regulatory ambition. However, Label Insight uncovers facts and discloses them, letting the data speak.

“Our purpose is really about transparency,” says Patri. “And our mission centers around transparency–to provide transparency through data, that is our core mission.” Through the work, Label Insight started with a mission and has taken off.

Label Insight wasn’t always a multi-located, 70+ employee company that creates strategic alliances with big names such as the FDA and NielsenTurning Point

Label Insight, then named Food Essentials, was part of Arch Grants’ inaugural class in 2012. This was a pivotal moment for the company.

Winning included not just the $50,000 grant, but also access to resources, networking, publicity and affordable office space at T-REX. It was an infusion of money and resources, but being a part of Arch Grants also gave Patri and his partners some harder to quantify advantages.

“Most important, even though capital is very welcome, is the [sense that] you are actually doing something meaningful. That confidence you get from someone actually awarding you something like that is huge. It made us be more aggressive as well as believe in ourselves more. It was a turning point in our company because of that,” he said.

That June, Label Insight began working out of T-REX, in its original location in the Macy’s Building (also known as the Railway Exchange) Downtown. Patri worked from the space by himself, since the Xaviers weren’t living in the U.S. at the time.

But he was not alone. T-REX intentionally creates an environment that facilitates interactions among its tenants and the startup community.

Those connections, cultivated organically and set up strategically, had an exponential impact on Label Insight. At T-REX, Patri explains, they began to gain an “understanding [that] there are other people who are in the same boat as us.”

“[The space was] creating an ability to go down and walk across the hallway to talk to, maybe not the same companies, but similar stage companies and really bond and understand and help each other out. On top of that, there was a lot of publicity and outreach to the business community in Downtown St. Louis,” Patri says. 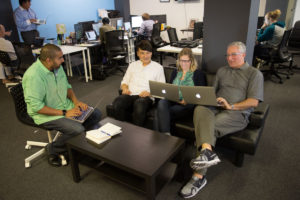 With a boost from Arch Grants, T-REX, and the startup community as a whole, Label Insight began to grow. By 2013 they had joined Capital Innovators, had closed an early seed round led by Cultivation Capital, and continued to raise funds.

Not Goodbye, See You Later

But Label Insight’s funds weren’t the only things that were growing. Operationally, they were gearing up.

They knew their time working out of T-REX was nearing an end, once they hit more than 10 employees. The timing, once again, was favorable. T-REX had plans to relocate to the Washington Avenue loft district to the Lammert Building, which it acquired in 2013.

Rather than move twice, Label Insight coordinated to move a few weeks ahead of the organization, officially parting ways. But they didn’t move far.

Thriving as a company meant a lot of change for Label Insight, but one thing they were dedicated to keeping constant was community. They sought out real estate that would be proximal to T-REX and found it in the Curlee Building.

After each moved, T-REX and Label Insight were next-door neighbors, the ideal kind who gather together and look out for each others’ best interests.

Now Label Insight is established, and they are in a position to give back and make a greater impact within the local startup scene. Currently, Patri and the company is asking, “How can the startup ecosystem allow, especially engineers and the technical people, to come down and see what we’re up to and to use that as a way to attract talent? How can we get them to stay in St. Louis instead of them going to the coasts or Chicago and realize there’s a great ecosystem in downtown that they can be apart of that’s growing?”

The answer to Patri’s questions: plan for growth.

In the near term, the company plans to begin sponsoring events held at T-REX. Hosting and gathering entrepreneurially-minded and talented people at T-REX, Patri hopes will showcase all the promising opportunities and existing culture the area has, thereby stoking more growth and retention for St. Louis.

Increased awareness and an influx of talent in the community will benefit the entire region, and will, of course, benefit Label Insight as well. They have their sights set on expanding and are continuing to grow the St. Louis office.

“We’re hiring and we’re hiring locally, which definitely means in St. Louis. We think of St. Louis as our home, where we really got our big break. If there are smart people, send them our way,” he said.

You can’t get much more transparent than that; even for a company with transparency at the heart of its mission.