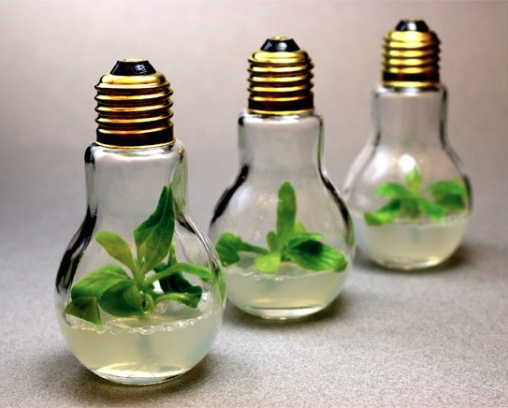 Glow In The Dark Plants: Disrupting Lighting with Plant Genomics and Alexander Krichevsky

Alexander Krichevsky is founder of Bioglow, a biotech company working on plants as alternatives to electricity-consuming light sources.

What if the answer to lighting up a room was to have more houseplants? Alexander Krichevsky is founder of Bioglow, a biotech company working on plants as alternatives to electricity-consuming light sources.

How do you produce the plants?

We started with a popular ornamental plant called Nicotiana alata, or “ornamental tobacco”. There are a large number of glowing organisms in the oceans.

To produce the first glowing plant, we took a set of six genes coding for light-producing proteins from a bacterium named Photobacterium and incorporated them into a plant’s chloroplast genome. We did that by coating nanometer-sized gold particles with DNA containing genes and “shooting” these particles into the plant’s leaves using a gene gun.

A whole plant can then be grown from a single leaf cell transformed by the DNA-carrying nanoparticle. Once the first glowing plant is produced, it can be propagated as any regular plant.

In our case, propagation by cuttings worked best. Since the genes coding for luminescence are incorporated into plant’s DNA, all of the glowing plants’ progeny for generations to come will be glowing as well.

How did you end up in St. Louis?

I came to St. Louis in 2010 for the Ag Innovation Showcase. I fell in love with the town, but more than that I was amazed by the outstanding work done by the Danforth Center, Biogenerator, Missouri Technology Corporation, BioSTL and other local organizations in fostering biotech and entrepreneurial ecosystem.

Shortly thereafter we secured an investment for Bioglow from a strategic partner totalling $2.2M and there was no doubt in my mind that St Louis is the right place to grow the company. We moved to St Louis and started the operations here in 2011.

What other projects you currently working on?

This will lead in the future to plants that will not require nitrogen fertilizer, thus reducing agricultural production costs, benefiting the environment and ultimately enhancing the quality of human life. I got the Monsanto Award for this work at the most recent StartUp Connection event here in St. Louis.

How did you get started bootstrapping a biotech firm?

Essentially any biotech venture must be bootstrapped. In the “idea” stage, it’s very difficult to find professional investors since the risk is too high.

We started in 2007 with some grants and “seed” investment from high-net-worth individuals. By 2010 we developed the first glowing plant prototype, and this work was published in one of the top-tier journals, PLOS One.

At this stage, when the risk was sufficiently reduced, we were able to secure a $2.2 million investment from a strategic partner and bring the product to market.

Tell us about the picture you sent for use with this story—what’s interesting to you about it?

The picture, as you can see, is an electrical bulb with a glowing plant inside. The idea behind it is to show the potential of glowing plants to become an alternative to electrical lighting in the future.

In any industry that’s small like mine, you know everyone, and it is important to learn to work and collaborate with everyone.

The poor state of the economy (laughs). When I got my PhD, there wasn’t a cushy job available and I had to go my own way.

Failure is not the right word, I think the right word is “testing.” One of my investors started as a not too well-off guy, was living in a basement and his first two companies didn’t work out.

His third netted him half a billion dollars. I think in business it’s a lot like in cooking, a dish that you cook for the first time is rarely perfect, but the more time you repeat the process the better your dishes become.

Don’t be discouraged by negative results, it’s about testing fast, if necessary failing fast, then moving on to the next project until you identify those that work out great.

I’m very focused. When I take time off, it’s to do things like go to WeWork Summer Camp, a weekend in upstate New York for entrepreneurs.

What’s your go-to tool for the controversies that can emerge in your field?

We get very little controversial reactions, even with publications like Mother Nature Network, because we focus on the long term benefits—a future in which we wouldn’t need to burn fossil fuel to produce light is pretty good for the planet. Overall it seems that the public likes our products quite a bit.

You can’t be a part-time entrepreneur, you either do it or you don’t.

How can people follow you or connect with you?

People can contact me through bioglow.us or buy a plant there, too.