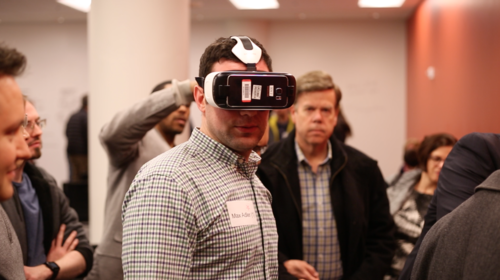 “Almost every element of our lives in the next five to 10 years [is] going to be touched by this technology. It will be the next big platform after mobile.”

VR/AR (virtual reality and augmented reality, for the uninitiated) is an industry that’s made a lot of noise as of late, with Mark Zuckerberg touting its importance and companies like Google and Samsung throwing energy and money towards VR/AR initiatives and projects.

“VR/AR creates a more immersive experience to do anything. When you can immerse yourself into any environment, history has shown that people will gravitate towards it,” says Pettyjohn.

“I think naturally everyone’s going to find that they will be more emotionally attached to VR/AR experiences than we are with what we look at on our flat screens today.”

As founder and CEO of Aisle 411 (an app that essentially acts as “Google maps for finding products in stores“) Pettyjohn had being doing a lot of augmented reality development for several clients. As those clients kept asking for more, Pettyjohn began connecting them with people who could help.

“I was offering to help them find other vendors that could do various parts of the solutions that they wanted. I realized really quickly that the VR/AR space is growing so quickly, it’s literally all over the globe, but it’s still very fragmented and no global professional trade association existed that helped connect different companies for reports, knowledge and research.”

So out of necessity, and after discussing the idea with other bigger players in the market, Pettyjohn decided to form a professional global trade association.

“Our mission is to foster knowledge, research and connection in the ecosystem, and to help bring together solution providers with the brands and customers that are buying virtual reality and augmented reality so they’re more efficient whenever they deploy,” says Pettyjohn.

“What we don’t want to see is companies throwing a lot of money into significant testing within the VR/AR field but then have issues arise because they weren’t executing intelligently. This is trying to bring together some of the smartest people in the world to help avoid inefficiencies.”

On Feb. 11, the first VR/AR Association Chapter Event was held during Venture Cafe in St. Louis. Nearly 100 people came out to see live virtual reality and augmented reality demos and hear from some of the leaders who are building solutions in the market, like John Chicoli who oversees training systems at Boeing.

“We actually have more going on in VR/AR than people realize, it just hasn’t been publicized,” says Pettyjohn of the St. Louis region. “Essentially, with Cortex being a hub in St. Louis for innovation, it provided a great jumping-off point to be able to start the association here. It also helped that I’m here, but we wanted to help put VR/AR on the map in St. Louis and this association is a great way to do it.”

Setting up chapters throughout the world, the next launch is set for March 17 in San Francisco hosted at Samsung’s Mountainview offices featuring speakers from Google, the inspector general of the US Postal Service and tech author Shel Israel.

Though events will vary from metro to metro, the important aspect of the VR/AR Association is facilitating connections.

“Basically we are targeting bi-monthly networking events that bring thought leaders to the table and allow them to speak and discuss some of the bigger issues and opportunities within VR/AR,” Pettyjohn says. “In St. Louis, we have some big companies that are going to be touching VR/AR.”

“So we want to bring them together, but we also want to bring together some of the educators. If you look at Wash U, SLU, Lindenwood and the rest of our higher ed community, there is a huge opportunity to really cultivate a talent pool that can develop, program and be smart in business in terms of VR and AR.”

Pettyjohn says that the VR/AR Association aims to keep universities up to speed through unique programming, geared towards connecting students to internships and jobs with the member companies globally—a collective of institutions that is broader than many might assume.

“Most people are surprised that whatever type of business you’re in, there is an application that is already being developed and there is already value that can be created through this technology.” he says.

“Education, medicine, entertainment, gaming, productivity—It’s going to be very exciting to see how it touches everything we do.”