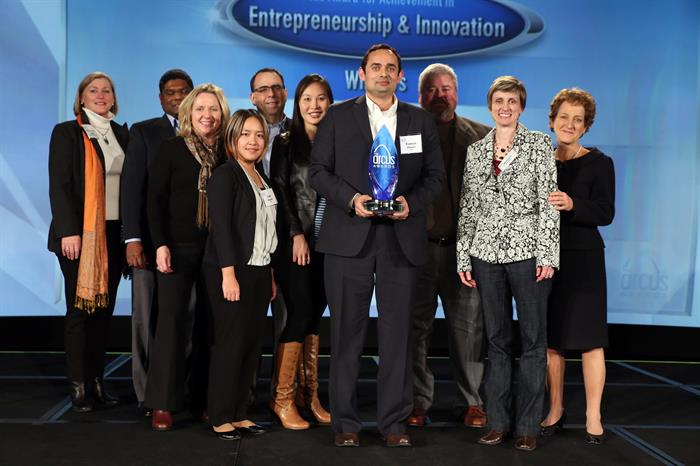 At a launch party at T-REX tonight, ITEN released its 2015 Startup Tech Report offering encouraging information for the region and the tech startup world.

As a veteran organization of the St. Louis entrepreneurial ecosystem, ITEN provides unique programs to accelerate product development and assists with connections with talent, mentors, networking and funding opportunities for a diverse crowd of entrepreneurs.

< The ITEN team took home a St. Louis Regional Chamber Arcus Award in 2015. Photo courtesy of ITEN.[/caption] “We’re intentional about providing opportunities for everyone and we don’t shy away from it,” says Francis Chmelir, Executive Director of ITEN. “We make sure everyone feels connected to the economic initiatives in the area and we nurture talent in all areas and from all backgrounds.” Not only did 2015 mark a big year for the tech startup world, but also ITEN specifically. In January, it became a stand-alone non-profit entity, after operating under the Innovate St. Louis umbrella since 2008.

Since the initial publication of the annual ITEN report in 2012, St. Louis has built a reputation as a welcoming community to entrepreneurial-minded people for its openness and collaborative spirit.

“Entrepreneurs are going to pursue their ventures regardless of what’s available,” says Chmelir.

“Mutually beneficial relationships, organizations and support companies help move startups along. They build upon themselves. They come here for the funding but also the community that has developed. Entrepreneurial development is a part of everyone’s professional development.”

ITEN surveyed 425 startups for this year’s report, up from 310 last year. You can find a digital copy online, but here is a peek at some of the report’s key takeaways:

Moving in to 2016, ITEN is structuring its programming around four technology clusters:

Big Data/Analytics, Cybersecurity & Financial Services, Infrastructure, Software and Mobile Development and Healthcare IT. These clusters will enable corporations and startup founders to connect with the top talent for effective collaboration on business solutions.

This reorganization will help as ITEN’s Corporate Engagement Program launches in 2016, allowing corporate partners targeted pathways to find companies working in their sector.

The number of full-time employees working in tech startups is up 36% from last year, while part-time employees is up 16%. “The energy is palpable, even intoxicating in this environment,” says Colleen Liebig, CEO of Plugged-In St. Louis. “Our embedded culture of growth and innovative spirit continues to breed new leadership.”

St. Louis tech startups are finding funding on their own.

Splice Machine jumped from second place to first this year, with newcomers VelociData and Bonfyre coming in sixth and 10th, respectively. ITEN also tracks St. Louis’ fastest-growing tech startups of each year, with GeoNumerical Solutions taking the top spot in 2015.

The amount of women-owned companies has actually decreased since last year.

The report features a number of charts that break down data further, including one that shows 40% of our region’s founders are from the St. Louis metropolitan area and 20% of our founders graduated from a St. Louis area college. Our number of non-US founders has jumped from 8.4% in 2014 to 15% in 2015, and the 26-35 age group continues to be the top age group for founders.