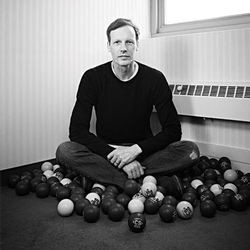 Accelerate St. Louis caught Square founder Jim McKelvey on camera for some of his insight when it comes to startups beginning their search for funding

Accelerate St. Louis caught Square founder Jim McKelvey on camera for some of his insight when it comes to startups beginning their search for funding. Among his points in the two-minute video, McKelvey points out funding was never his first step:

“I’m really not the right guy to ask if the goal is to raise money, but if the goal is to build a product, I would say that these days, your opportunities are greater than they’ve ever been. … The tools available, to build something before you actually get funded are just incredible.”

Part of Global Entrepreneurship Week, the event features a venture showcase of 70 early-stage startups, a resource fair and an award presentation ceremony, where the winner of the $120,000 Accelerate St. Louis Challenge will be announced. Tickets are $25 to attend. Find more information at startupconnection.org

Mayor Francis Slay and Women’s Foundation have announced an initiative to benefit businesswomen in St. Louis. On Aug. 11, St. Louis became the second Missouri city (following Kansas City) to embark on a partnership with Women’s Foundation to increase the number of women serving on city boards and commissions.

Currently, 31 percent of the city’s board and commission seats are held by women. The first appointment created out of this partnership, named Appointments Project – St. Louis, was Bridget Halquist, who will now serve on the St. Louis Firefighters’ Retirement Plan Board.

The BioEntrepreise Midwest Healthcare Growth Capital Report has shown that healthcare startups in the Midwest have reported $507.8 million in total investments in the first half of 2015. The report included 144 companies, with the majority of funding taking place in Ohio ($158.6 million). In Missouri, the report indicates that six St. Louis companies raised $27.1 million and four companies in Kansas City raised $7.1 million.

Kelsey Waananen
Kelsey writes and serves as Managing Editor for ALIVE Magazine. She previously contributed tech, pop culture and news articles to Newsy and Examiner.com. A Colorado native, she ventured to the University of Missouri for college, graduating with a degree in convergence journalism.