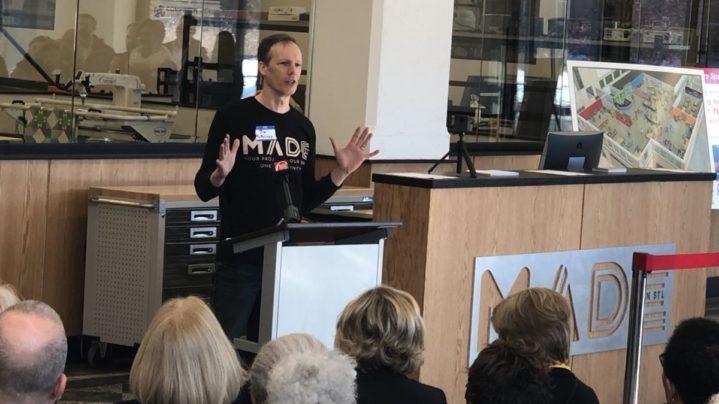 Exactly one year after TechShop went dark in Cortex, the lights have be turned back on. The local maker community in St. Louis have been invited back into a new, larger makerspace on Delmar Boulevard. The new makerspace is the result of the foresight of Dennis Lower, Jim Mckelvey and Doug Auer, and offers a chance for makers to continue what was started at Cortex.

The new “makerspace” is called MADE, which is an acronym for ‘Makers, Artists, Designers, and Entrepreneurs.’

One year ago TechShop shut down – they declared bankruptcy. “It was a wonderful little organization… so we declared that St. Louis would be one of the cities that would save our maker space.” Says Jim Mckelvey @2000F about MADE the new maker space in delmar. pic.twitter.com/4Pf0F5y4aM

Within days of TechShop closing, they put out a call via Cortex to regional makers and convened a special Venture Café Gathering session where a plan was unveiled to find a new makerspace home.

“We were all shocked, particularly our maker community, a number of whom had started businesses at TechShop and now faced the uncertainty of filling orders going into the holidays. With outstanding management provided by Third Degree Glass Factory, we were able to keep the makerspace open through the end of last year, and pledged to create an even better 2.0 makerspace going forward,” said Dennis Lower.

In St. Louis, the former TechShop is reopening within barely a week of bankruptcy. https://t.co/C3kVL65xNW

Sad to see the TechShop franchise closing shop nationwide and in #StLouis. Was a great opportunity for up and coming #machinists, #artists, #Engineer to test out their skills and, in some cases, operate their businesses. #nichemarket.https://t.co/xebUgA2OIq pic.twitter.com/Hn562oWnyu

MADE lemons into lemonade

Recapping some of the challenges over the last 12 months, McKelvey commented in a press release, “Innovation is a process of trial and error driven by an entrepreneurial spirit. Last November, St. Louis was faced with a challenge to resurrect a maker space where makers of all ages could continue to build their dreams. Through a collaborative effort, one year later we have met that challenge and are launching a more robust maker space for our entrepreneurs and hobbyists.”

The former St. Louis TechShop equipment is now being managed by the team behind @stlglass – Find out more about the Maker Studio: https://t.co/Oqpg4d4z1K

One of the biggest issues with the shuttering of TechShop, was that their original business model meant that the host cities did not own their own equipment, McKelvey explained at the opening event for MADE.

Jim Mckelvey @2000F explains why TechShop shut down “@cortex not just a model for the nation it’s a model for the world. A series of rules and processes that works” – but TechShop’s original biz model meant Cortex didn’t own their equipment. So, in launching MADE they fixed this! pic.twitter.com/NB4dl9L68C

Now, the maker community in St. Louis has had all that equipment bought back from TechShop, with some amazing new additions such as an embroidery machine.

This is what’s being created here! From 3D printing to wooden lathes, to embroidery, literally anyone can create anything. pic.twitter.com/lbZ7ABGHBf

Grab your own 3D printed money clip… or make your own totem pole pic.twitter.com/itBCaOz0bE

From Crisis to Opportunity: Magic House Joins MADE

Also prior to the closure of TechShop, Magic House President Beth Fitzgerald had began discussions with Cortex on what could be done together to establish a City presence to serve urban children. After Fitzgerald and Lower considered a number of options and locations, the MADE opportunity emerged and the decision became clear – join with Third Degree and Cortex to co-locate The Magic House’s permanent City location in the MADE space.

The Magic House will provide STEAM programming to elementary and middle school students, stimulating their creativity and imagination year-round. “We are honored to join the MADE team of committed community leaders. We share both their desire to support our future generation of makers, artists, designers and entrepreneurs, as well as their passion to give back to the St. Louis community,” said Beth Fitzgerald, President of The Magic House.

As MADE member director Emily Elhoffer told STL Magazine, “It’s been just an amazing effort on everybody’s part to be able to hustle and in 365 days, put together the locally run, beautiful maker space that we have here… Kids can come in at any age and start at the Magic House, and then as they grow up, as they build their skills up there, they can graduate and come down to the adult makerspace.”

Beyond Crisis or Opportunity: Plans to Build a Genius Cluster

Over the last year, Third Degree Glass Factory, St. Louis’s first glass art maker studio and education center, has guided the process of acquisition and renovation of the 5127 Delmar building and turned it into MADE’s new home.

Now Doug Auer is directing the day-to-day efforts at the new makerspace. “It was the serendipitous convergence of the right people, resources, organizations, and unbelievable timing that has turned lemons into lemonade. The Delmar location is nearly twice as large as the original space, allowing us to partner with The Magic House, St. Louis Children’s Museum to amplify MADE’s mission and impact,” Auer said.

Grand Opening #MADE St. Louis, a makerspace and center for creativity! This 32,000 square foot facility will have space for St. Louis makers, artists, designers, and entrepreneurs to learn, create, and connect with the community. https://t.co/GYI5FPFFqa

What’s especially exciting is that the renewed activity in the area promises to drive even more interest and investment around the Delmar location. At the Grand Opening, McKelvey revealed his hope that MADE might be the beginning of a “genius cluster.”

One of the coolest comments of the event so far was from Jim Mckelvey @2000F who revealed that hopes for this area of Delmar are to create a “genius cluster” of makers in this area. “I want you to come here and I want you to play. There are no rules; Wait, there’s a waiver!” ???? pic.twitter.com/hfC49scn8i

Certainly, there are already signs of a ripple effect. As St Louis Post Dispatch reported, ‘[John Watson, President of the Academy Neighborhood Association is] excited for what MADE and the Magic House will do for the neighborhood…”It’s having an effect right now,” he said. “People are now looking at this neighborhood and are wanting to invest in this neighborhood.”‘