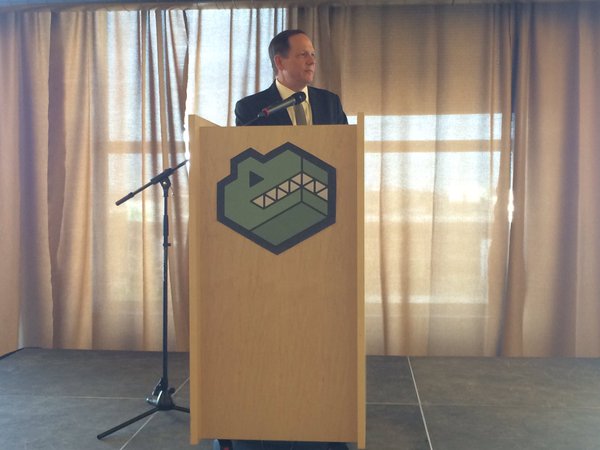 At the celebration, executive director of T-REX Patricia Hagan announced the launch of a capital campaign with the goal of raising $8 million over the next 18 months. Funds will go towards building out office space on its second, third and fourth floors.

NGA is Here to Stay

The National Geospatial-Intelligence Agency will be staying in St. Louis, as reported by the Post-Dispatch yesterday. This news keeps 3,100 jobs with the NGA in St. Louis, moving to the planned $1.75 billion development just northwest of downtown.

St. Louis beer startup Synek, announced a partnership with the Pittsburgh Pirates, as reported by the St. Louis Business Journal, to place a Synek draft machine in each PNC Park suite. Representatives from Synek say they’re also in talks with other MLB teams.

4 Hands Brewing Co. will release City Wide, an American Pale Ale in support of four area non-profits as a part of its philanthropic “Make Your Mark” project. With a release set for April 11, the new beer will be available in a 4-pack can format only and only in St. Louis, benefitting Cherokee Street/Love Park, Grace Hill, Great Rivers Greenway and the International Institute of St. Louis.

“Our goal is to get the consumer involved beyond just the beer,” says founder Kevin Lemp. “We strive to be a positive force in the St. Louis community.

Using the curriculum and learning platform from Flatiron, 80 scholarship recipients will participate in their own program taught by independent instructors, learning the fundamentals of Ruby on Rails and building out their own web app.