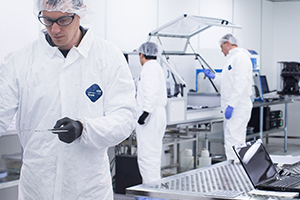 On January 19, startup Adarza BioSystems, Inc, based in St. Louis and Rochester, New York, closed on $17 Million in Series C financing. Here's what the life science company is focused on next.

Less than a year ago, Adarza closed on $5 Million in Series B financing led by Cultivation Capital Life Science Fund, Lewis and Clark Ventures and the Venture Capital Unit of Siemens. Local investment and the availability of premium talent in science and engineering brought Adarza BioSystems to St. Louis and continues to contribute to its growth.

Adarza BioSystems, Inc. is a label-free platform technology that enables the simultaneous detection of hundreds of analytes in a single drop of fluid.

New president Brian Witherbee explains the meaning of “label-free” in this context. He says, “Our technology provides a way to accurately measure different proteins in your sample (blood, cultured media, sputum, etc.) in its native form as it exists in nature.

Other competing technologies need to have non-native forms of the proteins modified (labeled) with a chemical in order for them to be accurately measured. By not modifying the protein of interest our AIR technology is both sensitive and accurate.”

Adarza’s approach is better for patients and improves the quality of testing outcomes.

Witherbee continued, “Our tool allows the researcher to take one sample and 400 different measurements. As we’re entering this realm where we are starting to understand the biology around cancer, having a tool like this where you can multiplex and get a good overview of what is going on in a human system gives more options to the clinician to be able to successfully treat it with drugs and other therapies.

Adarza’s AIR (Arrayed Imaging Reflectometry) Platform distinguishes their approach from their competitors because it separates each analyte, removing the risk of cross-reactivity.

Witherbee said, “One of the things that is unique about our tool is that with some of the other technologies there is opportunity that you could get mixed results, because of cross-reactivity where as with the Adarza AIR there is 0% cross-reactivity.” Cross-reactivity results in inconclusive results due to the unintentional mixing of the analytes. 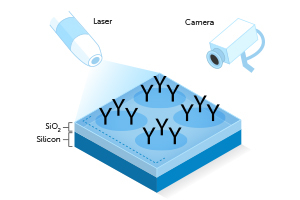 The AIR Platform process begins with the application of the sample to a silicone chip and incubating it. A rinse and dry step results in an image produced by suppressing background illumination in order to reveal hidden detail on the chip. Within minutes, the image reveals its first results for analysis.

Adarza BioSystems was founded in 2008 by Dr. Benjamin Miller, Professor of Dermatology, at University of Rochester in Rochester, New York. Miller serves as Chairman of Adarza BioSystems’ Scientific Board.

Witherbee said, “Miller has been the driving force to a lot of the early observations and development of the technology. Rand Henke, retired CEO, started working with the technology and over the years the intellectual property was licensed to Adarza.”

Rochester is a likely place to have started an immunoassay imaging company. As the home of Eastman Kodak Company and Xerox, there are many people in the area with scientific knowledge about imaging.

Witherbee said, “This technology got developed out of a place where imaging technology has been in development for a long time. There is a lot of entrepreneurial effort around imaging. The work that has come out of High Tech Rochester has pushed and helped enable some of these technologies.”

Why move to St. Louis?

Adarza BioSystems moved to O’Fallon, MO in January 2015 as a result of Series A funding. They found BioGenerator, an accelerator focused on cultivating a thriving biosciences sector in St. Louis. As they worked to assemble Series B funding, they found a lot of support in the area.

Witherbee said, “We are here because of a lot of efforts by different investment groups–at first Cultivation Capital, Lewis & Clark Ventures and BioGenerator and now RiverVest–all local community investors looking to further invest into St. Louis. They are helping to move those companies along and provide their experience in terms of tools and connections as well as obviously the financing.”

St. Louis offers substantial assets in the area of scientific human resources as well. Witherbee said, “One of the nice things about being located here in St. Louis is that there is a wealth of great scientists and engineers here.”

Today, Adarza has about 20 employees.

Closing on Series C funding is clearly a step in a great direction for Adarza Biosystems. According to the press release, proceeds from the financing will be used to further expand production capacity in its St. Peters, MO manufacturing facility and fund final development and commercialization of Adarza’s first immunoassay product consumable and instrument platform.

The company is also continuing to explore how to commercialize their product. Witherbee said, “We’re still trying to get to the voice of the customer. We want to know what is tough in utilizing these technologies for researchers and how we can make the experience easier. We are still doing the development, which makes it a critical time for us to listen.”

Witherbee sees his new role as taking Adarza’s product to the next level. He said, “Adarza has done a great job of understanding and developing this unique and exciting technology. Now I need to help focus the company on delivering a commercial technology.”