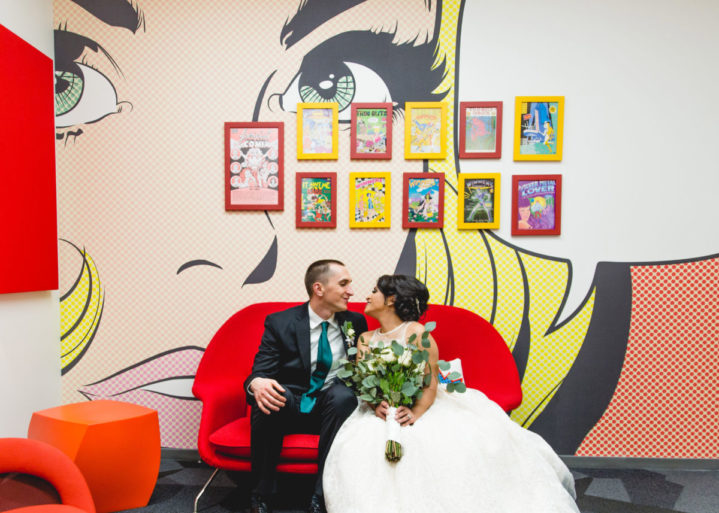 A Match Made at Venture Café.

Venture Cafe’s Thursday Night Gathering is founded upon the philosophy that bringing people together creates “serendipitous collisions,” which can lead to completely unpredictable positive outcomes. What Venture Café is yet to be known for, however, is ennobling tricksters to empower magical romances… and weddings.

Michael Kehoe and Ala Al Lozi first met at Venture Café in April 2017. In December 2018, they got married and, in a move that could be considered a surprise innovation even for their venue owners, our newly-weds hosted their wedding at Venture Cafe’s newly-opened Innovation Hall. The symmetry of that alone is perfect, but the symmetry of how love met Ala and Michael at Venture Cafe is even more perfect.

After graduating from St. Louis College of Pharmacy and working as a Pharmacist for six years, our Bride in this story, Ala, pursued an MBA at UMSL. In the process, she impressed the Dean who recommended her for a role at UMSL Accelerate. She’s now in charge of co-curricular programming, as Assistant Director of UMSL’s Accelerate Program, a cross-curricular program that offers opportunities for students to learn about entrepreneurship.

“Since I’ve been working at Accelerate, I have come to realize that my passion is working with students,” she said. “It’s so important for students to have innovation and entrepreneurship in their curriculum because it just makes them better at whatever it is they end up doing, whether they start their own business or have a corporate job.”

The groom, Michael, is Founder and CEO of non-profit Johego, a 501c3 that builds enterprise software to help social workers, police officers and other public servants connect people in need with social and medical services, such as overnight shelter or mental health treatment. In November, at Startup Connection, Johego released version 2 of their software to 18 new counties in Missouri, bringing their geographic coverage area to about 1 million Missourians.

At the time, Michael shared with EQ that his company name, Johego, is derived from truncating the name of a ceremonial story given in the Native American Iroquois language, which roughly means “what we live on.” The message of that story is, “we can build a better life together than on our own.”

Sharing a passion for meaningful work and heeding the call to make a difference to others, are the kinds of conversations one expects to have at a Venture Café Thursday Gathering. Fully absorbed in the serendipity collider, it’s to be expected that Michael and Ala would find common ground.

Yet their collision was almost too serendipitous.

To my surprise, as the newly-weds recounted the events of their first meeting to EQ, there is evidence of some deus ex machina in their midst. A god emerged from Venture Café’s meetup machine, took human form temporarily, and did what the divine does best: gave a little nudge of courage.

However, the nudge came not from the arrow of Cupid, but instead from the flute song of Kokopelli, The Trickster, and Native American god of Fertility. The trickster god compelled a beautiful white lie from his incarnate host body.

At Venture Cafe’s Thursday Gathering, one night in April 2017, Michael and Ala were talking startups with Chris Miller, a man of “many hats.”

Miller is both Director of Inter-Disciplinary Entrepreneurship at UMSL and Founder and CEO of the Mission Center, a social enterprise incubator and accelerator. Operating in that dual capacity, he acted as one of Michael’s business advisors and also happened to be one of Ala’s colleagues at UMSL Accelerate.

“Chris saw that we were developing a rapport,” Michael explained to EQ, “So he said, ‘It’s my birthday, I’d like to go do Karaoke, would you two like to join me?'”

Accepting the invite of music and song to celebrate Miller’s birthday, the couple-to-be sang their hearts out to a gathered crowd. It wouldn’t have normally been their suggestion for first dates. But if you’ve ever done Karaoke before, you’ll know that it raises the spirit – there’s a reason that epic stories are told as musicals.

“It turns out it wasn’t his birthday at all! He just made up a really good lie. It was, like, the best on the spot setup, ever!”

A white lie for a white wedding.

“That’s such a sneaky, clever, awesome thing to do. I was really impressed.”

On May 3, 2018, on Michael’s birthday (like, really his birthday), he proposed to Ala on a Thursday evening on Duncan Avenue outside of Venture Café after a celebratory dinner.

“It had been raining, but it just so happened that the rain had stopped,” Michael said. “We went for a walk and I pulled out my phone to show Ala a video I had recorded a couple of months before, when I realized I wanted to marry her.”

“While she was looking at the video on my phone, I got down on one knee and as the sun was setting, asked her to marry me… She didn’t believe me at first.”

“But then I said, ‘I talked to your dad yesterday, I got his blessing.’ She said yes, and it was just one of the happiest days of my life.”

That spirit of music carried Ala and Michael’s through to their wedding reception which incorporated elements of their own cultural heritage, blending American and Jordanian customs.

“I’d like to give a shout out to Innovation Hall. It is a beautiful venue, and the event was flawless the whole night,” Ala said. The wedding dance for the bride, a first-generation Jordanian, was a traditional Zaffa dance (which is akin to a carnival procession that brings the bride and groom families together for the wedding), played by by a Jordanian band, harking from a nearby town to where her father was from.

“So they sung with the same accent and the same ancient songs and it was just absolutely beautiful,” Michael said, explaining the Zaffa dance, “The band goes to the bride’s home they do they sing the songs there’s dancing and then this musical group leads this procession to the groom’s house where there’s some dancing there, and then the combined bride and groom parties go to where the reception is. And then there’s just this giant massive dance.”

“I understand we’re only the second couple to marry having met at Venture Café,” Michael said. “We’ve got that going for us. But we’re the first to be married at Innovation Hall!”

Herewith is a story of intervention that The Great Gatsby could only dream of. Yet what’s even more remarkable, is how closely their origin story matches the blessings that the Hopi Trickster god bestows.

According to this website, “the humpbacked Flute Player, mythical Hopi symbol of fertility, replenishment, music, dance, and mischief…. Whatever the true meaning of Kokopelli is, he has been a source of music making and dancing, and spreading joy to those around him.”

Meet at Venture Cafe, get persuaded to go to Karaoke under the false premise of someone’s birthday. Discover that this person is the love of your life and get married. The timeline has Kokopelli’s mark all over it.

I asked the groom if he had made the connection between the Iroquois roots of his company name and the Native American spirit, that his romantic interlocutor seemed to embody, when introducing his future wife. He hadn’t, but the idea was not lost on him.

“I’m really digging this metaphor you came up with for him — of like the trickster God and just being, like, kind of clever. But for a good cause,” said Michael. “[the original Johego story] is really an allegory for companion planting, the idea being that things grow better together than they do separately.”

“But in order to be successful, it takes some careful planning and really good timing. And that’s exactly what happened here.”

“We were in the right place at the right time with the right person to, kinda, plant the seeds of this relationship. And this beautiful garden of our relationship is what blossomed from that.. and it was, y’ know, Chris Miller, AKA ‘the Trickster Love God’ that brought it all together.”