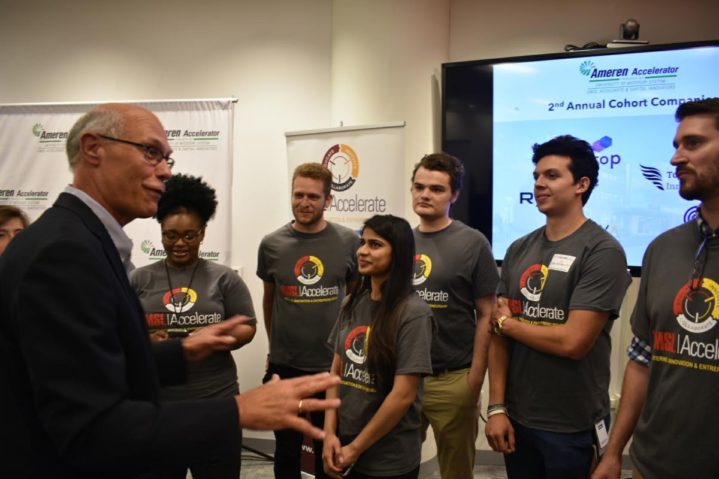 Ameren Accelerator Provides a Multi-purpose Approach to Innovation and Education

August 31st marks the last week of the hands-on portion of Ameren Accelerator’s 2018 program. Since June, six “energy-focused” start-up companies have been participating in a 12-week program as part of the second Accelerator powered by UM Systems, UMSL Accelerate and Capital Innovators.

The program, established in 2017, is designed to provide a win-win-win for UMSL students, entrepreneurs and Ameren itself while fostering innovation in the energy industry.

Warner Baxter, the President and CEO of Ameren has outlined three primary objectives of the program. The first is innovation for their customers. The second is to foster economic development of the region and the third is workforce development.

A diverse cohort of companies

The 2018 cohort represents a diverse slice of companies from St. Louis, Brooklyn, Austin, Israel and Canada. The international element is only partially by design, says Dan Lauer, Director of UMSL Accelerate, noting that the opportunities for innovation can come from anywhere.

What brought those companies to apply for Ameren Accelerator is the chance for $100,000 in perks, funding and office space, as well as one-one-one working sessions with Ameren Accelerator’s Champion teams, groups of industry mentors made up of Ameren leadership augmented with UM campus faculty/scientists and alums to provide technical assistance, mentoring and engagement. The unique mix of academic and corporate expertise provided by these teams set the program apart from many accelerators.

The companies that will be showcased aren’t exclusively what you might think as being in the “energy” space either, despite the program’s namesake sponsor and chief partner.

More specifically focused on the energy space are TouchLight, a company developing floor tiles that harvest power through use; And ResilientGrid, a Critical Infrastructure Management company.

It is no accident that the cohort is comprised of a variety of companies in terms of their respective products and markets. Each has been carefully vetted by UMSL, Ameren and Capital Innovators for diversity as well as innovation.

As a public utility Ameren, even with a long history of innovations around electrification (the 1904 World’s Fair) and electric vehicles (circa. 1920), is still sometimes regarded as part of a staid old-guard rather than a new wave thinker. The company is actively seeking to interact with diverse companies and viewpoints to broaden its own horizons.

Ameren is a 100% rate-regulated energy utility, but it is publicly traded and has shareholders. These shareholders receive dividends based on the equity portion of the capital projects Ameren invests in. By building out and optimizing the grid through innovative technologies, or implementing charging stagings for future electric vehicle customers for example, they can deliver more electricity to more people for less money.

“We add value for our shareholders by adding value for our customers, not the other way around,” says Steve Kidwell, VP of Corporate Planning at Ameren Corporation.

This is an important distinction when discussing Ameren’s investment in the Accelerator and innovation since unlike other companies whose investment in early innovators might be driven by promised gains in market share, Ameren takes a very long-term view.

The long-term roadmap for Ameren is driven by its ability to mitigate risk and disruption and add value to existing customers while adding new ones.

“Innovation,” explains Steve Kidwell, “is part of the long-term strategic roadmap for Ameren. And a big part of that roadmap is figuring out what to do by eliminating what not to do.”

To help them do this, Ameren wants input from companies whom they wouldn’t normally be connected to.

“One of the primary reasons Ameren participates,” Kidwell continues, “is to get experience and receive learnings from companies on the opposite end of the spectrum from Ameren in terms of size and scale. To put a seat at the table for small and nimble innovators. A really important aspect of this is diversity.”

Investment in innovation and corporate citizenship

Innovation programs like Ameren Accelerator have a corporate citizen component as well. The startup ecosystem is a cause célèbre for many corporations looking to give back to their community. By providing relatively small investments to emerging entrepreneurs or funding for a local entrepreneurial support organization, a company can check many simultaneous boxes in their corporate citizenship initiatives:

In regards to this aspect of the program, Kidwell feels that there’s a built-in responsibility for Ameren to “build the entrepreneurial community and economic development of the St. Louis region. Utilities are connected to the health and vitality of the community they serve,” he says.

New ways of thinking about entrepreneurship and education

Dan Lauer doesn’t just see Ameren’s commitment and participation as strictly strategic or philanthropic either, and offers up a more practical reason. He sees Ameren Accelerator as a new way for companies to cultivate and recruit the future workforce and engage universities directly in this mission. As part of the Accelerator, UMSL students have internships with the startups, Ameren or as part of running the overall program.

“The program is about three things — Educate, Innovate and Collaborate,” explains Lauer. “We do things differently– We do and make rather than just sit and listen.”

The program’s value to UMSL seems clear as well. With the Accelerator program at its center, UMSL has attracted aspiring entrepreneurs and business students, adding thousands of new student hours and providing learnings and offerings around the University’s many new entrepreneurship tracks and certificates.

Not everyone is an entrepreneur though, Lauer admits, but “critical thinking and problem-solving, collaboration and purpose-driven action– these are the entrepreneurial and intrapreneurial skills companies are looking for.”

“UMSL Accelerate is looking to do more,” says Lauer. “We’re wondering if we can do 3-6 more of these with different companies in different industries.”

The unique educational aspects of the program appealed to Ameren as well. As part of its commitment to the region, Ameren wanted to help with the encouragement and education of St. Louis’ future leaders and workers.

“74% of UMSL graduates stay here in St. Louis,” Lauer says towards the end of our conversation, making the final point that the students participating in Accelerate will one day be the UMSL graduates applying for and working for the Amerens of the world.