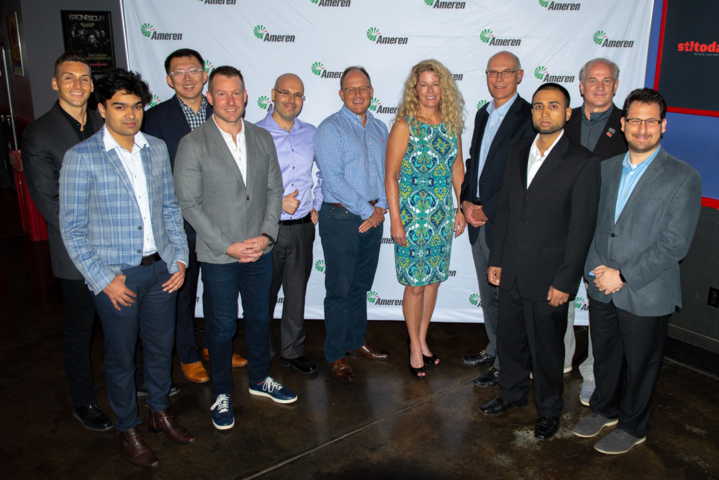 The Ameren Accelerator Demo Day showcased the culmination of a 12-week energy-technology accelerator.

Entrepreneurs from six startups, who came to St. Louis this summer to participate in the 2018 Ameren Accelerator, took part in a Demo Day hosted by Ameren Corporation (NYSE: AEE) and partners on September 11th, 2018.

The event showcased the new energy technologies in development and represents the culmination of the Ameren Accelerator program, an innovative public-private partnership with the University of Missouri System, UMSL Accelerate and Capital Innovators. The Ameren Accelerator assesses, mentors and invests in energy-technology startup companies – all with a goal of helping Ameren meet the future energy needs of its 2.4 million electric customers and 900,000 natural gas customers in Missouri and Illinois.

Startups From All Around The World

“These six companies represent some of the world’s most promising, innovative technologies for the energy sector,” said Warner Baxter, chairman, president and CEO, Ameren Corporation.

“From day one, the goals for the program are to better position Ameren to meet its customers’ future energy needs and expectations, attract job-creating startups to St. Louis and provide university students the opportunity to be more involved and engaged in the energy business. I am convinced the Accelerator better enables Ameren to identify and implement innovative energy solutions, deliver long-term value to the communities we serve in Missouri and Illinois, and help drive economic development in the St. Louis region.”

The participating startup companies – from Canada, Israel and the United States – include Applied Particle Technology, Jrop, Narya Security, ResilientGrid, Ryvit and TouchLight. They presented their energy solutions and ideas to potential investors, business executives, academic leaders, community representatives and guests at The Pageant in the Delmar Loop.

Three of the startups that have taken part in the Ameren Accelerator are committed to maintaining a St. Louis presence, and one company has hired additional employees for its St. Louis-based enterprise.

“Year two of the Ameren Accelerator allows us to gain momentum as a leader in the energy-technology space,” said Judy Sindecuse, CEO, Capital Innovators. “By sourcing innovations worldwide and leveraging our model, the program has catapulted the growth trajectories of six cutting-edge startups with unique applications to the energy sector. Ameren is a true leader of corporate innovation in St. Louis, and this effort provides the infrastructure for job creation, enhanced talent pools and community building that will positively impact our region into the future.”

Notable advancements showcased at the event were:

Applied Particle Technology (APT) (based in St. Louis) has developed a wearable exposure-monitoring system for employees working in potentially hazardous spaces. Through the Accelerator program, APT launched pilot programs with occupational health and safety experts to test its wearable devices in the field and acquire data points for product iteration.

The APT team has made significant product and market discoveries and refined their target market, pricing strategy and fundraising strategy, while simultaneously working on projects for the National Institutes of Health and NASA.

Jrop (based in Toronto) is redesigning logistical infrastructure for mass-adoption of ridesharing and autonomous vehicles. With support of the Accelerator, Jrop has advanced negotiations with several state universities to optimize pick-up and drop-off points to reduce congestion stemming from the use of ridesharing companies.

With a refined sales plan and go-to market strategy, Jrop has been in discussions to implement its solutions with the city of Chandler, Arizona, and several property developers.

Narya Security (based in Tel Aviv, Israel) can help enterprises fully recover from ransomware infections in under 30 minutes, with a single click. Through Accelerator connections and introductions, the Narya team met with several of St. Louis’ Fortune 500 corporations to gather insights and generate interest from these companies in piloting its RansomWall software.

During the program, Narya deployed its software with a bank in Israel and with Ameren. Narya CEO Uri Fleyder-Kotler is relocating to St. Louis to continue to grow the business.

ResilientGrid (based in Austin, Texas) has developed a visualization software that integrates all data streams and delivers them as viewable maps to control-room consoles. Since starting the program in June, ResilientGrid has raised $300,000 in investments.

During the program, the company closed one paid pilot program and is in the process of closing another with a sales pipeline valued at $11 million.

Ryvit (based in St. Louis) has developed a platform that provides turn-key integrations, enabling uninterrupted data exchanges between commonly used applications. Through the Accelerator, Ryvit has conducted research into ways of expanding its product offering to the large-enterprise market and secured 17 new contracts. In addition, Ryvit expanded its St. Louis office from 19 to 25 employees.

TouchLight (based in New York) is developing electricity-generating floor tiles that harvest energy from footsteps with a goal to help businesses achieve energy independence. With extensive help from the program and Ameren’s lead liaison, TouchLight was able to drastically accelerate its development schedule for its pilot-ready prototypes.

During the program, the team hired a senior mechatronics engineer, attracted the interest of commercial-property developers and explored partnership opportunities with local universities for advanced power-technology research and development.

In addition to accessing subject-matter experts from Ameren, the startups have been able to draw upon the full resources of a public university system. University of Missouri System faculty and staff provided expertise, guidance and coaching throughout the Accelerator program.

Students gained first-hand knowledge of and experience in the energy business, provided critical program support and offered much-needed services including research activities, promotion and office staffing. This enhancement to corporate acceleration has provided mutual benefits for the university system, its students and the startups.